The National Federation of Independent Businesses released today the results of the February survey of small businesses. You can read a summary here, or the original release here. 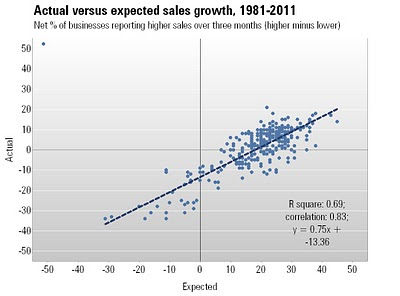 Moreover, the slope of the linear relationship between actual and expected sales growth is far below 1 (0.75, with data between Feb. 1981 and Feb. 2011). For each additional 1% of managers expecting higher sales over the next three months, on net, the net percentage of businesses with actually rising sales is only 0.75%.

Why are small businesses biased about sales growth?

This is not the same as saying that actual sales always falls short of expected sales. I am using a binary variable here, not dollar sales. It is possible that the businesses that get their optimistic forecast right, regarding sales increases, experience a deviation of actual versus expected sales big enough to make up for the shortfall of businesses that get the forecast wrong. But I'm skeptical.

A word of caution is in order: self-reported sales forecasts of small businesses are probably a bit too rosy.
Posted by Francisco on Tuesday, March 08, 2011