The recent decline of the labor force participation rate

A striking feature of the last recession and present recovery has been the decline of the labor force participation (LFP). In January 2008, at the beginning of the recession, the LFP in the United States was 65.7%. By January 2011 it had dropped to 63.9%. That is the sharpest three-year decline ever observed in the history of this time series. The LFP is now at levels not seen since 1984. In this post I show that changes in the age distribution of the US population have been responsible for one third of the fall of the LFP; other factors (business cycle, structural forces) explain the remaining two thirds. 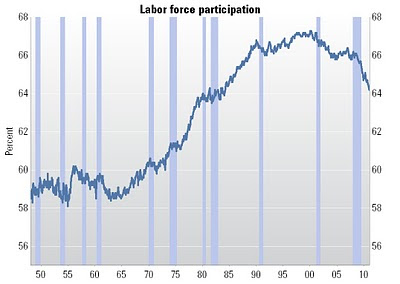 The LFP is the proportion of the population who is either working or looking for a job, relative to the size of the population eligible to work. More specifically, the numerator is the number of non-institutionalized civilians, ages 16 and older, who is either employed or looking for work. The denominator is the total civilian non-institutionalized population, ages 16 and older. The difference between numerator and denominator is the number of people who are not looking for work, either because they are in school, retired, staying at home as homemakers, or physically unable to work, for example.

Two groups of forces are responsible for the drop of the LFP. First, demographics. Different age groups have different LFP’s. People younger than 25 or older than 65, especially, are much less likely to participate in the labor market than the rest of the population. As the age distribution of the population changes, the total LFP also changes, even if the within-group LFP remains unchanged. Because the first baby boomers turned 65 in 2010, some observers may be wondering the new retirees are responsible for the precipitous decline of the LFP.

Second, structural and cyclical factors. When job opportunities become scarcer, two things happen. New entrants in the labor market (recent graduates, for example) put off their job search. Also, former unemployed persons stop looking for work. In both cases, they are excluded from the ranks of the “active population,” depressing the LFP.

Whether the recent drop in the LFP is due to demographics or to structural/cyclical reasons is relevant because it will affect the future path of the unemployment rate. If the LFP has fallen so much over the last three years because of demographic factors, we should expect the LFP to continue declining at about the same rate, without affecting much the unemployment rate. If the crash of the LFP is due to structural/cyclical factors, many of those who are currently out of the labor force may come back to the job market at some point, raising the LFP. This phenomenon will also keep the unemployment rate elevated even if the economy is creating jobs, as those who were formerly out of the labor force join the ranks of the unemployed. In other words, a low LFP may be hiding a large “shadow army” of labor, waiting to join the labor force.

In reality, a combination of demographic and cyclical/structural factors is at work. I did the legwork to find out what fraction of the LFP crash is attributable to each.

My calculations reflect two simple counter-factual experiments. First, suppose that the LFP within each age group did not change, but the age structure of the population changed as it actually did. What would the LFP be now? Second, suppose that the age structure of the US population had not changed between 2008 and 2011, but the LFP within each group changed as it did. What aggregate LFP would we be observing now? The following chart shows the answer: 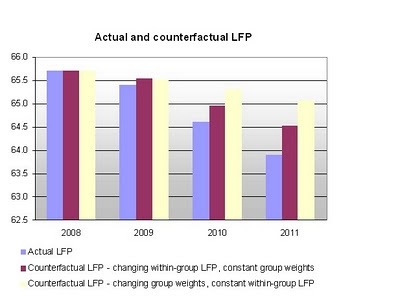 The table below shows a breakdown of by age group (NSA data, corresponding to the month of January):

Notice that the LFP rose within the 65+ age group, that it fell for all the other age groups, and that the population share of those older than 54 rose substantially, whereas the population share of the 34-44 groups declined significantly.
To make a long story short: the large drop in the LFP during 2008-2010 is mostly due to a collection of cyclical and structural factors, not to demographics.

Update (March 24, 2011): The Congressional Budget Office published their labor force participation projections through 2021. They estimate that between 2007 and 2010 demographic effects reduced the LFP by 0.5 percentage points (p. 10 of the report, last paragraph). My estimate between Jan. 2008 and Jan. 2011 was 0.6%. A very interesting feature of this study is that the CBO projects the within-group LFP, something which I did not even try to explain.