Financial stability has been a bubbling topic since 2008--although it never really stopped simmering since the emerging market crises of the 1990s. Over the past year or so, a dominant view seems to be forming that financial instability risks are rising, particularly among some emerging-market countries.

Here's a list of great articles or papers, and one oral presentation, on the topics of financial instability, financial crises, etc. I have perused recently:
Chapter 1 of the IMF's Global Financial Stability Report (pdf), published this week, warns of the main risks to global financial stability. Here's a summary of the report:

1. Financial stability risks have increased since October. Lower growth prospects and disinflation have prompted central banks to respond by loosening policy. The BoJ and the ECB are the most notorious examples, but other central banks have relaxed their monetary policy stances as well.

3. The fall in nominal yields, and flattening of the yield curve, are a threat to the life insurance and pension fund sectors, especially in Europe.

4. Monetary policy divergence has lead to a sharp increase in volatility in foreign exchange markets amid the appreciation of the U.S. dollar. Term premia are narrow in all three main currencies (dollar, euro, and yen). Asset valuations remain elevated, in part because of persistently loose monetary policy. Market volatility in general has increased.

5. Quantitative easing can boost inflation and growth, but it also encourages greater financial risk taking, so monitoring and addressing financial excesses is necessary. Additional policy measures are necessary to enhance the effectiveness of monetary accommodation.

The report also has special boxes for two sub topics:

Here are a few charts from the report that caught my attention. Having a good legal system helps a country de-leverage. According to the chart below, an index of the strength of the legal system explains 45% of the cross-sectional dispersion of de-leveraging: 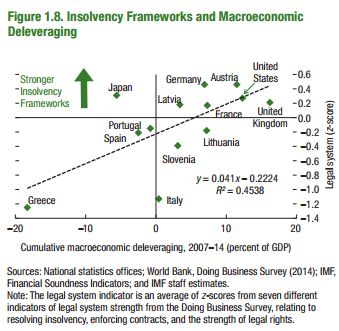 An increasing number of short- and long-term European government bonds have a negative yield: 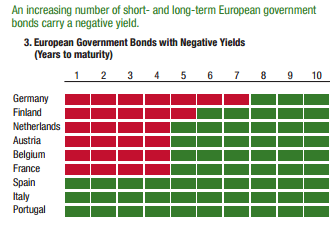 QE in the eurozone and Japan could lead to significant portfolio outflows. Eurozone investors might allocate up to €1.3 trillion abroad by the end of 2015, a good chunk of which would go to the U.S. Insurance companies and pension funds in Japan could invest as much as $559 billion, or 12.8% of GDP, in foreign assets by the end of 2017 (that's if announced policies are fully implemented and work to their fullest extent across the three reform arrows): 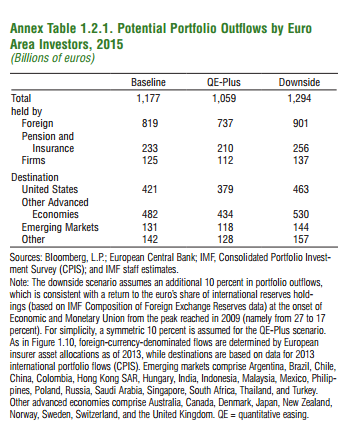 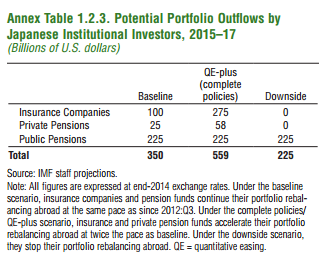 Non-performing loans and write-offs are frighteningly high in the eurozone and Japan: 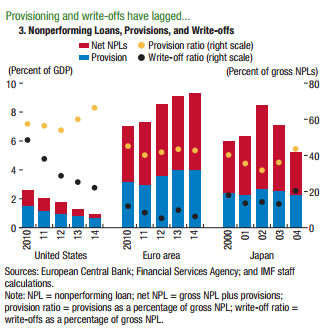 European life insurers are in the unsustainable business of writing long-term policies without assets of a correspondingly long duration, which has resulted in negative duration gaps. Moreover, many policies contain high return guarantees, which are unsustainable in a low-interest-rate environment. Insurers in Sweden and Germany have the largest mismatches:

Despite the recent round of monetary policy easing in emerging markets, real rates are expected to rise in 2015 in almost all of them:

Debt of the non-financial (private and government) sector of emerging markets has increased dramatically since 2007: 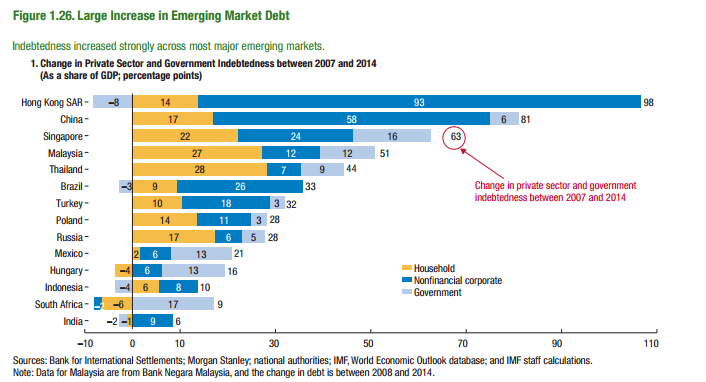 A significant share of debt is owed by firms with poor interest-coverage ratios: 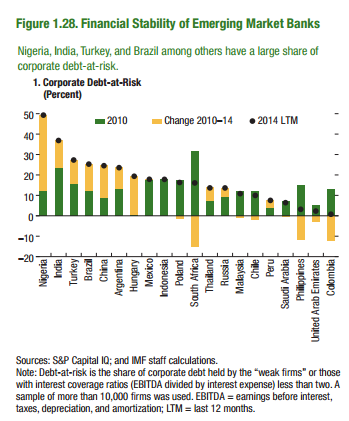