Market-based measures of U.S. inflation expectations plummeted over the last quarter of 2014--which is a concern now that inflation is so low. In particular, two market-based gauges are often quoted: the break-even rate from 5- and 10-year bond yields, and rates from inflation swaps.

Janet Yellen thinks that factors other than inflation expectations may be moving these "inflation compensation" rates (emphasis mine):


There are a number of different factors that are bearing on the path of market interest rates, I think, including global economic developments. It is often the case that when oil prices move down and the dollar appreciates, that that tends to put downward pressure on inflation compensation and on longer-term rates. We also have safe-haven flows that may be affecting longer-term Treasury yields. So I can’t tell you exactly what is driving market developments. But what I can say is that we are trying to communicate our thoughts as clearly as we can.

Oh, and longer-dated expectations. Well, what I would say, we refer to this in the statement as “inflation compensation” rather than “inflation expectations.” The gap between the nominal yields on 10-year Treasuries, for example, and TIPS have declined—that’s inflation compensation. And five-year, five-year-forwards, as you’ve said, have also declined. That could reflect a change in inflation expectations, but it could also reflect changes in assessment of inflation risks. The risk premium that’s necessary to compensate for inflation, that might especially have fallen if the probabilities attached to very high inflation have come down. And it can also reflect liquidity effects in markets. And, for example, it’s sometimes the case that— when there is a flight to safety, that flight tends to be concentrated in nominal Treasuries and could also serve to compress that spread. So I think the jury is out about exactly how to interpret that downward move in inflation compensation. And we indicated that we are monitoring inflation developments carefully.

Summarizing, Yellen mentions four things that, together or individually, compress "inflation compensation" (the yield charged by investors for bearing both inflation and inflation risk):

As I said, there might be correlation among those four factors. I would add a fifth item, which is perhaps correlated to "safe-haven" flows: liquidity. As the market in nominal treasuries is deeper than that in TIPS, and investors have a preference for liquidity, a surge of inflows to the dollar may increase the liquidity premium that TIPS must offer, reducing the break-even inflation rate. I wrote about this a long time ago.

Recent developments offer a glaring example of how "inflation compensation" measures can be a noisy gauge of true inflation expectations. See, for instance, these charts: 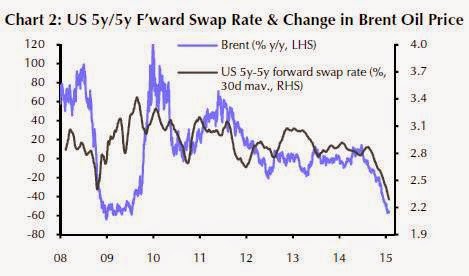 Below is a chart of the price of Brent, the 5y-5y expected inflation measure from break-even rates, and a 5y-5y estimate from the Cleveland Fed's time series. The Cleveland Fed doesn't give you the 5y-5y forward rate, so I computed the latter with the usual spot-forward formula: 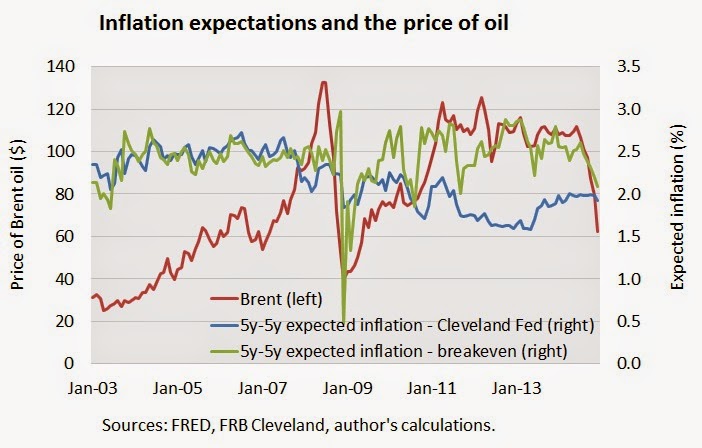 Up until 2008, the gap between market-based and Cleveland Fed estimates was small and transitory. Then the two diverged, especially after 2010. For a while I was suspicious: the Cleveland Fed's estimates had become more than one percentage point lower than the estimates from break-evens, and the level was persistently close to 1.5%--too low, from a(n admittedly subjective) point of view.

Of late this has changed, as the 5y-5y breakeven has plummeted, but the Cleveland Fed's estimate has not. More importantly, the Cleveland Fed's measure continues to be much less sensitive to the price of oil than the market-based estimate, which is a desirable feature for an estimate of long-term inflation expectations.

Two important questions: Did the market-based estimate of expected inflation become more sensitive to the price of oil after 2008, as the chart suggests? (Beware, the price of oil might be a proxy for something else.) Why?
Posted by Francisco on Friday, January 30, 2015