In the chart below I have displayed the GDP and inflation surprises of 2014, by country.

I define a "surprise" as the difference between the 2014 forecast in December (which should be close to the actual outcome) and the 2014 forecast in January (the one-year ahead forecast). (The data come from the Consensus Economics surveys of January 2014 and December 2014.) Because countries differ in the volatility of their macro aggregates, I have normalized each surprise by the standard deviation of actual (GDP, CPI) growth between 2004 and 2013. (The historical data come from the IMF's World Economic Outlook database). 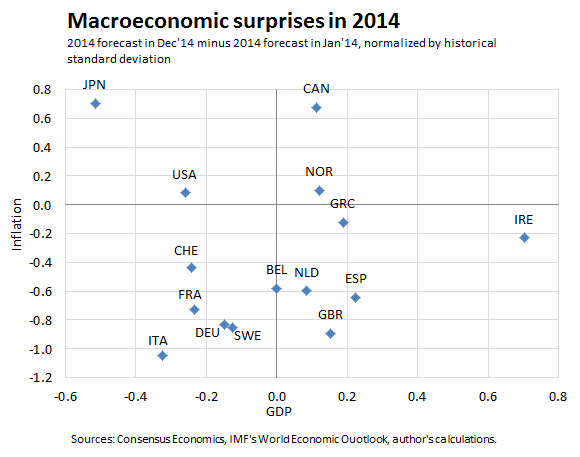 The extremes: forecasters massively under-predicted the GDP growth of Ireland, but were too optimistic about growth in Japan. For Italy, the consensus fell quite short for both inflation and GDP growth.

Inflation was higher than expected in Japan and Canada, but negative inflation surprises were more common than positive ones: Out of 15 countries analyzed, inflation forecasts were too high for 11 countries. For GDP forecasts, surprises were evenly split between positive and negative.

Despite the remarkable acceleration of U.S. GDP during 2014, expectations early in the year were so high (and 2014:Q1 performance so poor), that actual GDP growth might come below what the consensus expected back in January.
Posted by Francisco on Monday, December 29, 2014