Notable pictures: Dissent (or lack therof) within the FOMC

What explains dissent within the FOMC? Daniel Thornton and David Wheelock contribute a fascinating research note (pdf) to this quarter's issue of the Federal Reserve Bank of St. Louis Review. (A 2013 article by Mark Wynne at the Dallas Fed also touches on dissent and FOMC communications.)

A few highlights (selection and emphasis mine):

1) Ninety-four percent of all votes by FOMC members were cast in favor of the policy directive adopted by the Committee.

2) There have been relatively few dissents since the early 1990s. 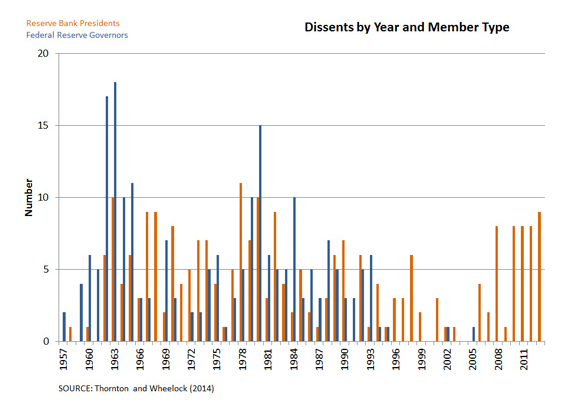 In Thornton and Wheelock's research note, the bit of statistical analysis focuses on the relationship between the dissent rate and inflation and unemployment. And in the note's introductory paragraphs, the authors say that, trying to explain the variation of dissent rates over time:


Our study suggests two main reasons for such variations: (i) differences in macroeconomic conditions and (ii) the level of disagreement among the Committee members about how to judge the stance of policy and how best to achieve the Committee’s ultimate objectives.

When I read the note, however, I get a feeling that institutional factors are behind the lion's share of those variations. The way the FOMC operates has changed dramatically over the decades. Let me show you a few examples, with quotes from the research note itself:

There were only a handful of dissents during FOMC policy votes between 1936 and 1956, all of which occurred between 1938 and 1940. 5 During World War II, the Federal Reserve pledged to cooperate fully with the Treasury Department to finance the war effort.

Federal spending and budget deficits increased when the Korean War began in 1950. Inflation began to rise and the Fed found it increasingly difficult to prevent interest rates from rising. With the support of key members of Congress, the Fed successfully negotiated an agreement with the Treasury Department, known as the Fed-Treasury Accord, in March 1951.

Differences among FOMC members soon arose over how to implement monetary policy to achieve the Committee’s macroeconomic objectives. However, until 1957, no member ever dissented on a policy vote. The absence of dissents in the early post-Accord years may have reflected, at least in part, how the Committee was organized and the nature of the policy directives issued by the Committee. The Banking Act of 1935 required the FOMC to meet at least four times per year. At that time, directives issued by the full Committee were vaguely worded statements that members may have found little to disagree with. An executive committee consisting of the Chairman and Vice Chairman and three other members met biweekly to issue operating instructions to the manager of the Open Market Desk at the New York Fed. Presumably, those instructions were in line with the desires of the full Committee.


FOMC procedures changed in 1955. In that year, the FOMC voted to abolish the executive committee and to meet more frequently—every three to four weeks, instead of just once per quarter. Beginning in 1956, at each meeting the full Committee voted on the operating directive to the manager of the Open Market Account, resulting in about 18 policy votes per year instead of the usual four votes in preceding years. The FOMC maintained this schedule until the early 1980s, when the number of scheduled meetings was reduced to eight per year.


In 1977, the FOMC began to set annual targets for the growth rates of various money stock measures. Although the Committee’s operating directives continued to express policy in terms of money market conditions, they also specified the Committee’s long-run objectives and near-term expectations for growth of the monetary aggregates and an “operational objective” for the federal funds rate, which was usually a range of either 50 or 75 basis points.

The explanation given for dissenting votes in FOMC records indicates that dissenters sometimes disagreed with the Committee’s chosen growth rate targets for monetary aggregates, the tolerance range for money market conditions or the funds rate, or some other element of the broader directive.


In 1983, the FOMC began to include information in the directive about the likely direction of future changes in policy. Subsequently, some dissents were against the signaling statement rather than the current policy stance.


The frequency of dissents has at times been associated with the use of unconventional policy measures. For example, in the early 1960s, the FOMC abandoned its long-standing policy of conducting open market operations solely in Treasury bills. Some members opposed the move, as well as explicit efforts to simultaneously lower long-term interest rates while raising short-term rates—a policy sometimes referred to as “Operation Twist.”More recently, after the FOMC lowered its target for the federal funds rate to the zero lower bound in 2008, some members expressed skepticism about the use of certain unconventional policy measures, including “credit easing,” “forward guidance,” and “maturity extension programs” to ease monetary conditions further.


Explaining the break in the early 1990s

Another institutional change is the publication of the votes of the individual members of the FOMC--and this change might help explain the decline of dissent after the early 1990s, and the stark difference in the dissent rate between governors and presidents, also after the early 1990s.

I'm no expert on the institutional details of the FOMC, but I do know that the Fed started issuing statements announcing the outcomes of its meetings in February 1994. Prior to that, when the committee changed the monetary policy stance, it didn't announce it to the public. Instead, market participants had to figure out the change in stance by watching what the open markets desk did in securities markets after a meeting.

On February 4, 1994, under Greenspan, the FOMC issued its first statement. The statement consisted of three terse paragraphs, and it didn't identify who voted for or against the FOMC decision. Starting. however, with the meeting of May 17 of that year, the statement disclosed which presidents had submitted requests for a change to the discount rate, which at the time was a main operational target of the FOMC. For example, that month the statement revealed that the Board of Directors of the Cleveland Fed had not requested to raise the discount rate, whereas the other eleven regional banks had done so. That was, then, the first time the FOMC had published any hint of internal dissent immediately after a meeting.

On March 19, 2002, the FOMC started including in its immediate announcements the roll call of the vote on the FOMC decision, including the identities and preferences of dissenters, which I believe has been the custom ever since.

Could this increased transparency on the FOMC's internal disagreements explain (1) the decline of dissenting votes since the early 1990s, and (2) the almost total consensus among governors? Thornton and Wheelock themselves offer a hint to an explanation:

Thornton and Wheelock point to this institutional feature to suggest why presidents are more hawkish than governors. But I think the difference in how presidents and governors are appointed affects their incentives to dissent publicly. Governors (who face reelection by Washington) may be less willing to dissent if disagreement is frowned upon by politicians--who face an asymmetric information problem when assessing the performance of the governors. The regional presidents, on the other hand, might be closer to their boards of directors than governors are to politicians, or perhaps the regional boards of directors are more knowledgeable about monetary policy than Washington politicians are, reducing the information asymmetry between appointee and "appointer."

A second difference between governors and presidents is that the former are appointed for 14-year terms, throughout which they get to vote at the FOMC meetings. Governors have a lot at stake if they ruffle feathers often, or if they're perceived as "eccentric" or "self-centered". The regional presidents, on the other hand, vote at the meetings for just one year, after which they're replaced in the rotation by the president of a different regional bank. (Except for the New York Fed president, who always votes.)

A slightly different answer is that this consensus among governors is an endogenous response to the increased transparency about dissent: Governors not only say they agree more with each other, but genuinely agree more with each other. Fear of "sticking out one's neck" publicly might persuade governors to listen more to each other and to the chairman, which results in less dissent. This hypothesis begs the question of why the regional presidents, who aren't based in DC, don't try as hard as the governors to communicate with other FOMC members between meetings--unless you buy my previous hypotheses on varying costs of dissent.

All these hypotheses, however, require a measure of inattention, as the minutes have always disclosed dissent, but they're published weeks after the meeting.

*I don't have the dataset, so I'm reading off the charts on the research note.
Posted by Francisco on Wednesday, September 17, 2014