Inflation in the eurozone: goods versus services

Giulio Zanella (hat tip to John Cochrane) writes a post suggesting that Italy’s deflation is mostly imported. He supports his idea with two observations. First, the price index of goods has declined, but the price index of services has increased (coincidentally, by the same percentage). Second, among goods, those whose price has declined are: unprocessed food, energy, tobacco, and consumer durables. The first three have in common, Zanella says, that they’re traded in global commodity markets.

Assume that goods are tradable in international markets, whereas services are non-tradable—a good approximation for a country like Italy, Zanella says. Then, he concludes, the origin of Italy’s deflation is international and on the supply side, whereas the contribution of weak domestic demand is “modest.”

In this post I look at the questions of whether eurozone deflation is really “imported,” and of how big the deflation threat is.

For the currency area as a whole, disinflation is a lot faster for energy and unprocessed food than for the other components of the HICP:

Within the “core” inflation rate, durable and semi-durable non-energy goods are in outright deflation, whereas non-durable goods are not:

The distinction is important, among other things, because the optimal monetary policy response depends on the type of deflation. If deflation is imported, the ECB should do nothing, because commodity prices and the exchange rate are outside the set of things it can (or wants to) control. Let’s look, then, at the split of the HICP between goods and services.

The sub-index for all goods was falling at an annual rate of 0.3% as of July, whereas the price index of the basket of services was increasing 1.2%:

Services inflation appeared to be declining from 2011 up until April 2013, and since then it’s been more or less flat around 1.2% (to zoom in, adjust the dates on the chart above).

It appears, then, that a large part of the eurozone’s current disinflation might be “imported.” Another, smaller part of this disinflation is “homegrown,” but it doesn’t seem to be getting worse.

What’s the evidence across countries?

Goods inflation has declined in every single of the 15 countries I consider*. In all but two countries, prices are falling outright. 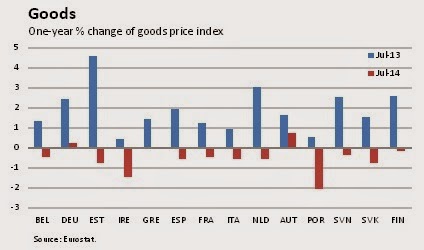 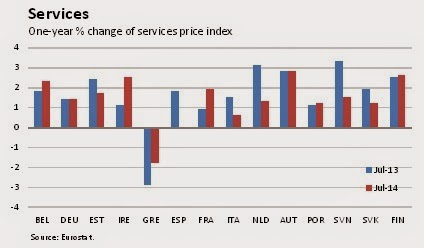 So far, then, I’d say the jury is still out on whether disinflation, for services, is continuing.

Clemente De Lucia, economist at BNP Paribas, just published a research note taking a deep look at services inflation. This is what I see, from the first section of his note (“Inflation decomposition”):

De Lucia mentions how, in the core, the current inflation rate is “slightly below its historical average,” and that in Germany and the Netherlands the services inflation rate is below the eurozone aggregate (although barely so):

2. "Lowflation” is spreading across services sub-categories, but deflation is less pervasive. To gauge the diffusion of disinflation and deflation, De Lucia looks at the percentage of the 39 sub-components of the services HICP that had an inflation rate between 1% and 2%, between 0% and 1%, and below 0%.

The evidence by country varies. De Lucia focuses on the total proportion of services sub-categories with inflation below 2%. That statistic is rising, De Lucia notes, in Spain, Portugal, Greece, Netherlands, and France. From that he concludes that deflationary pressure is mounting in those countries.

De Lucia's data end in May 2014. I gathered my own data to see what's happened over the past 12 months, for the eurozone aggregate. The proportion of service categories with inflation below 2% reached a maximum in February (70%), and has declined since then. The diffusion of deflation reached 18% in December 2013, and has fallen to about 5% in July.

It will be interesting to see a breakdown by country. So far, though, I'm not convinced that "domestic deflationary pressures" are mounting.

One interpretation of the ECB’s recent policies is that the bank is not reacting to today’s decline in the price of goods. Most of that is due to past declines in commodity prices—which the ECB has no control over— and to the past rise of the exchange rate—which the ECB doesn’t target. The ECB, instead, is reacting to the disinflation of services, and the risk (or expectation?) that it might turn into outright deflation. How serious is that threat?

Based on the (admittedly backward-looking) evidence surveyed here, the risk of "homegrown" deflation is there, but it's not increasing, imminent, or pervasive across countries. (De Lucia’s note continues with a promising, long section on inflation expectations, which I haven’t had time to read yet.)

A different interpretation is that the ECB sees deflation in goods as a problem it can solve—through the exchange rate. The euro appreciated steeply, through May, and that has driven the euro price of commodities lower. The new policies might be aimed at depreciation.

But that will have to wait for another blog.


*For visual clarity, I removed from the chart the three smallest members of the eurozone: Cyprus, Malta, and Luxembourg.
Posted by Francisco on Friday, September 05, 2014