1. The new round of U.S. sanctions on Iran, by Al-Jazeera.

Also, this just reminded me of the upcoming presidential elections. BBC reports that all eight of the candidates are hardline conservatives, and that the progressive candidates were banned from running.

The good:
1. The change in nonfarm payrolls was decent (175k), even good in this post-2007 era.
2. Local and state government payrolls keep going up, albeit slowly, a sign that the fiscal consolidation at the local and state level is probably over.
3. Payrolls in the temporary help services industry ("temps") went up again, and the one-month diffusion of payrolls by industry was almost 60%.
4. The labor under-utilization rate (U6) went down, even though the unemployment rate went up, a sign that discouraged workers and people working part-time for lack of a better option dwindled in number.

The bad:
1. Nonfarm payrolls for March and April were revised down by a net -12k.
2. Manufacturing payrolls have been declining for three months in a row. It is not clear whether this is a broad cyclical signal, or merely a sector story.
3. Federal government payrolls went down (although this was expected, given the fiscal consolidation under way).
4. The employment-population ratio is stagnant. It's been stuck at 58.5-58.6 since November 2012.
5. The six-month diffusion of nonfarm payrolls by industry declined in both April and May.

Overall:
A fairly positive report, indicating that employment keeps growing, albeit slowly, and that the slack in the job market is shrinking, slowly. However, the markets will probably zero in to the slight increase in the unemployment rate and hope for a delay of the Fed's tapering of QE. Clutching at straws, if you ask me.

I will leave you with this chart. 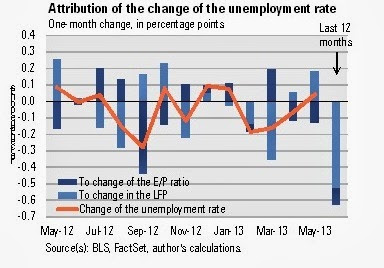