1. Emerging and developing economies already make up about 50% of the world's GDP at purchasing power parity. Their large size, and continued higher rates of growth than in advanced economies, have catapulted EMs to the top of the chart of main contributors to world growth. For the period 2012-17, the top contributors to world GDP growth are projected to be (in brackets, rank in 2002-07): 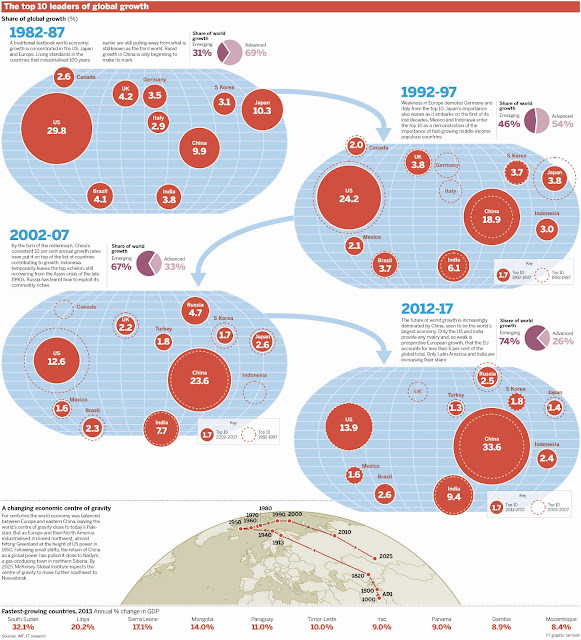 2. IMF paper by Lee, Syed, and Xueyan on consumption and investment in China. Abstract:


This paper proposes a possible framework for identifying excessive investment. Based on this method, it finds evidence that some types of investment are becoming excessive in China, particularly in inland provinces. In these regions, private consumption has on average become more dependent on investment (rather than vice versa) and the impact is relatively short-lived, necessitating ever higher levels of investment to maintain economic activity. By contrast, private consumption has become more self-sustaining in coastal provinces, in large part because investment here tends to benefit household incomes more than corporates. If existing trends continue, valuable resources could be wasted at a time when China’s ability to finance investment is facing increasing constraints due to dwindling land, labor, and government resources and becoming more reliant on liquidity expansion, with attendant risks of financial instability and asset bubbles. Thus, investment should not be indiscriminately directed toward urbanization or industrialization of Western regions but shifted toward sectors with greater and more lasting spillovers to household income and consumption. In this context, investment in agriculture and services is found to be superior to that in manufacturing and real estate. Financial reform would facilitate such a reorientation, helping China to enhance capital efficiency and keep growth buoyant even as aggregate investment is lowered to sustainable levels.

I am not surprised that the authors find evidence of excessive investment, but the insight that private consumption is heavily dependent on investment in the western provinces is new to me. And this has an important implication: if eventually investment growth slows down, as almost certainly it will, total domestic demand will slow down, regardless of how much rebalancing occurs away from investment and towards consumption.

3. S&P revised India's outlook to 'negative' on April 25, 2012. Fitch did the same in June of the same year. Moody's keeps the outlook as 'stable.' All three major agencies give India the lowest of the investment-grade ratings: BBB- (Baa3 in the case of Moody's).

As key drivers of the revision and possible future downgrade, the analysts at S&P wrote in June 2012: "The outlook revision reflected at least a one-in-three chance of a downgrade in the next two years if India's external position continues to deteriorate, its GDP growth prospects diminish, or if progress on fiscal reforms remains slow." I was not able to read Fitch's report, but in an April 2013 interview of CNBC with Art Woo, the agency's director of sovereign ratings, he said it was more likely than not that India would be downgraded, citing slower growth and the deterioration of public finances.

The odds are against India, I'm afraid. Since 2012:Q1, GDP growth has slowed further, the current account deficit has become wider, and the government deficit has shrunk only marginally. The IMF projects GDP growth (p. 153) to rise from 2012 to 2013, but so far we have not seen this improvement. The IMF also projects the government primary deficit to shrink marginally in 2013, but the total deficit to remain unchanged, as a % of GDP. The current account balance, at -4.1% over the 12 months to 2012:Q1, has declined to -5.1% as of 2012:Q4. And, although there are some big changes underway, but I get a sense that the latest wave of reform will amount to a marginal change, rather than a Big Bang, as it has been dubbed.