A few minutes ago the Federal Reserve released the preliminary December data on consumer credit (1).

Overall, the data are positive, if you interpret an expansion of consumer credit as a reflection of increased economic activity, improved consumer confidence, or a relaxation of credit constraints.

Non-revolving credit continues to grow at a brisk pace, an expansion that started around June 2010. During 2010 as a whole balances of non-revolving credit rose 1.7% (comparing NSA data for Dec 2009 and December 2010). The time series hit a new all-time maximum, for the first time since July 2008. Non-revolving balances have new recovered the amount lost during the recession.

Revolving credit (2) stopped contracting. The month-to-month change was 0.29%, not annualized. Over 2010 as a whole, however, revolving credit fell 7.5%. After a deep contraction during 2008-2010, as of December 2010 balances of revolving credit have fallen to the level of March 2006, and that is without adjusting for inflation. 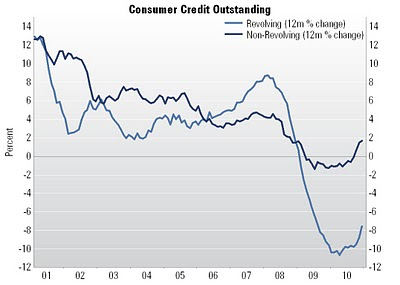 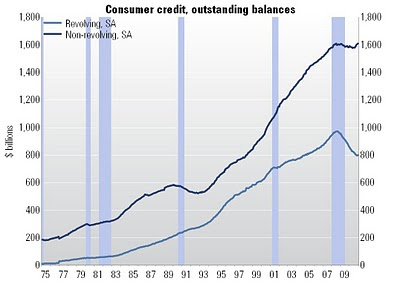 The release also included minor revisions to the data for the months of October and November.

Interest rates on new car loans, personal loans, and credit card accounts were not available in this release for the month of December.

(1) Consumer credit "covers most short- and intermediate-term credit extended to individuals, excluding loans secured by real estate." In plain English, consumer credit includes pretty much all forms of consumer debt, except for mortgages and home-equity lines of credit.

(2) The main component of revolving credit is credit-card balances. Non-revolving credit includes everything else: auto loans, personal loans, student loans, loans for mobile homes, etc., regardless of whether they are secured or unsecured.