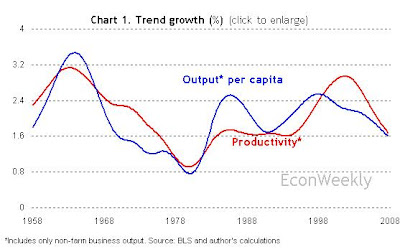 At the end of 2007 trend productivity growth was 1.7%, 1.3 percentage points down from the fourth quarter of 2001. Now productivity increases at the same pace as it did before the information revolution of the 1990s (see Chart 1). Why?

My story is one of sectoral shifts. The second half of the 1990s was marked by technological improvements in telecommunications. Cell-phones, e-mail, software and, above all, the internet, did two things: they lowered the cost of gathering information, and facilitated interactions among workers, both within and between firms. Both boosted productivity in knowledge-based industries. Not only that: those technologies created new jobs and even entire sub-industries.

Over time those technologies became well established. Investment in equipment slowed down. New job openings were filled by people coming from other industries, who were less productive than incumbent workers. To put it in two sentences: 1995-2001 was a period of technological deepening and creation of new services and industries; 2001-2007 were years of re-allocation of workers towards services. 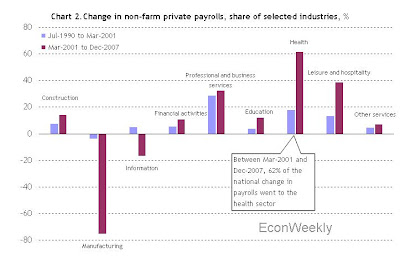 But another change is in the works. During the current business cycle, most jobs have been created in industries where it is difficult to increase productivity. Health services are a notorious example: 62% of the increase in non-farm payrolls happened in the health care industry. (Hat tip to Michael Mandel, from BusinessWeek.) It is hard to increase the value of services per hour in that sector, because we still rely on a large number of doctors, nurses, orderlies and administrative personnel to deliver one unit of output. Without having done an in-depth analysis, I would say that we have made enormous technological progress in diagnosing and treating health conditions, but that those technologies don’t save any labor.

A similar argument applies to the leisure and hospitality industry (hotels, restaurants, etc.), which absorbed 39% of the change in employment. Until we teach a robot to fry your eggs and make your bed, productivity will increase slowly.

* * *
Productivity is the most important, but not the only driver of growth. An economy produces more output per capita by: employing a higher fraction of the population, working longer hours, or squeezing more output per hour. Chart 3 shows the trend growth rates of each of those components. (I call them “trend” because they are constructed using smoothed time series. Technical details below.) The sum of the three series is equal to the growth rate of output per capita.

Increased participation in the labor force (top panel in chart 3) has grown by less than 0.5% in most decades. Hours per worker (middle panel) have declined decade after decade, reducing the growth of output per capita. But output per hour (bottom panel), also known as productivity, has grown routinely at annual rates well over 1%, and in some decades 2%.

Going forward, there are reasons to believe that productivity gains will become even more important. In a nutshell: the fraction of people who work is going to decrease. The fall of the participation rate already subtracted 0.12 percentage points from the growth rate of output per capita between 1998 and 2007 (see chart 3, top panel). Historically, the employment-population ratio has increased thanks to women, whose participation has increased since WWII. That trend has probably played out. The female participation rate reached a historical maximum of 58% in 1999, and since then it has stayed roughly constant. 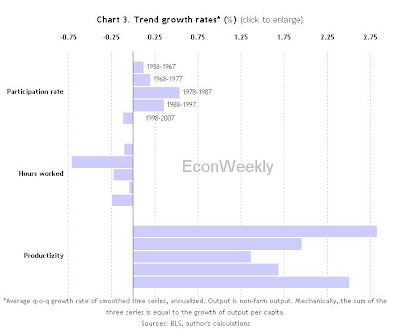 More importantly, the large generation of baby-boomers born between 1946 and 1964 will gradually retire from 2011 through 2030. That will push the participation rate down because their descendants, the X and Y generations, are not numerous enough to replace them. And immigrants don’t improve the employment-population ratio much because they add to both the numerator and the denominator.

Adding to those demographic trends, men in prime working age (25-54) have continued their slow, secular exit from the labor force. Their participation has declined from a maximum of 95% in 1969 down to 87% in 2007. Where did those men go? Some of them just replaced women as homemakers, but that cannot be the whole story. The New York Times published a story by David Leonhardt this week (hat tip: Vox Baby). He thinks that “these nonemployed workers tend to be those who have been left behind by the economic changes of the last generation. Their jobs have been replaced by technology or have gone overseas, and they can no longer find work that pays as well.”

Now let’s put together these pieces: the economy is re-allocating resources towards health and labor-intensive services; population aging will increase the demand for those services and reduce the number of people who provide them; and the information technologies of the “e-era” raise productivity at decreasing rates. Can the U.S. economy continue to deliver a growth rate of 2% in output per capita? And, if so, what will be the next driver of productivity?

We were successful to explain(smoothed by MA due to high measurement noise) evolution of productivity (as expressed by $ per hour from the Conference Board data base) in the USA as a function of labor force participation rate, LFP, as pubslished by the BLS.
http://inflationusa.blogspot.com/2008/02/on-source-of-changes-in-productivity.html


Cross country comparison also demonstrates that the evolution of the difference in productivity between developed countries is explained by the difference in LFP. http://inequalityusa.blogspot.com/2007/10/some-myths-about-slowdown-of.html