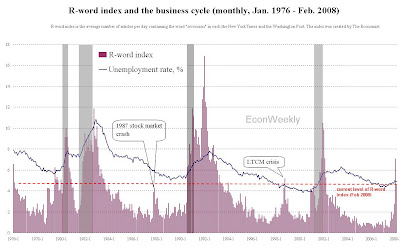 The Economist’s R-word index, which counts the stories in the New York Times (NYT) and the Washington Post (WP) that use the word recession, reached a seven-year high on the first month of 2008. On average, each newspaper published 7.1* stories per day containing the feared term. Since 1976, that level of coverage has only occurred when a recession is already under way —not that that means much, since we have seen only four such episodes in that period. 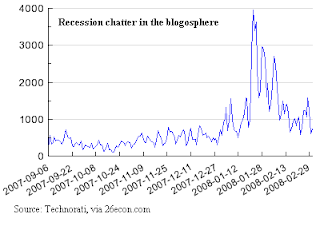 Both blog chatter, as measured by Technorati, and the number of Google searches for the R-word, were consistent with the buzz created by the press. (See charts above. Hat-tip to Aaron Schiff for the Technorati chart.)

In February, recession hum quieted down from 7.1 to 4.6 stories per day. A more comprehensive index** also fell sharply, from 3.7 to 2.2. Did that improve the public’s view of the economy?

Hardly. Most of the data released in February showed a slight worsening of the economic situation, and public opinion reacted accordingly. The average closing price of recession contracts at intrade, the prediction market, increased slightly from 63.3 to 64.8 between January and February. According to the Wall Street Journal’s forecasters, who are polled early in the month, the median estimate of the probability of a recession over the next 12 months went up from 50% to 65%. And consumer confidence declined from 87.9 to 75, also between January and February. (As a counterpoint, the preliminary figure of Michigan consumer sentiment inched up to 70.0 from 69.6.)

Why gloom is spreading but recession chatter has diminished is easy to explain. Extensive coverage of the stimulus package and of the Federal Reserve interest rate cuts inflated the R-word index in January, as I explained last month. In February, R-talk returned to levels more in line with actual economic conditions. 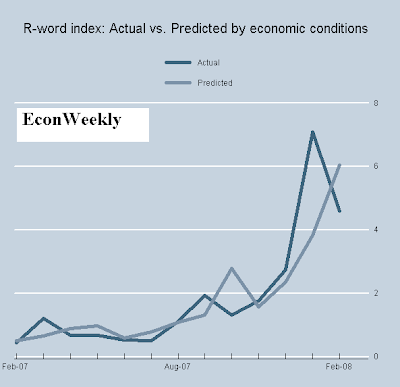 How much use of the R-word is justified? In February, about six stories per day and newspaper was reasonable (only for the NYT and the WP); at least that’s what my statistical model says.

The model, which I have changed since last month, makes predictions based on a set of economic variables and their lags. (Technical details below. Suggestions welcome.) The prediction tracked actual values quite closely from February through December (except in October). It missed the January buzz by a long shot, and predicted that we would see six stories per day in February, one and a half more than we actually did.

In March we will probably see an increase in recession chatter. My model forecasts 5.7 stories per day and newspaper, but that’s probably an underestimation. The Fed will make sure of that.


* Assuming that each newspaper publishes 26 issues per month.

Statistical model:
VAR, with monthly data, from January of 1976 through the latest month available. Each equation includes six lags. The variables are: the R-word index, the unemployment rate, the change in nonfarm payrolls, the slope of the yield curve (10-year minus 1-year), the growth of personal consumption expenditures on durable goods accumulated over the current and previous two months, and the growth of the industrial production index, also accumulated over the same period. I also include a set of monthly dummies and a dummy variable that equals 1 if the NBER makes a recession announcement. The unemployment rate is the first release reported by the BLS. The change in payrolls mimics the one reported by the BLS, that is, it is equal to the first estimate of payrolls for month t, minus the revised (first update) figure for month t-1. Both unemployment and payroll figures come from ALFRED. The yields on the ten-year bond and the one-year Treasury bill are monthly averages, from FRED. Durable expenditures come from the NIPA accounts, via FRED, and the industrial production index is from the Federal Reserve, also via FRED.