According to a study released yesterday by the National Association of College and University Business Officers (NACUBO), the endowment fund of Harvard University is worth $34.6 billion, a 19.8% percent higher than a year ago. 76 colleges and universities sit on endowments over $1b. Even more impressively, almost every one of the 733 institutions analyzed reports a double-digit increase in the value of its fund. (Look up the endowment of your alma mater here.) 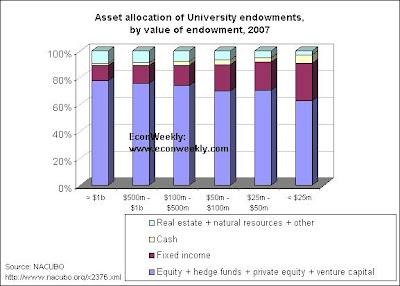 The increase in the value of the endowments has been the result of at least two factors: risk taking and stock market bonanza. First, higher-education institutions invest large portions of their wealth on high-risk, high-return securities. On a dollar-weighted average, in 2007 they held a 47.4% of their funds in equities, an 18.2% in hedge funds, a 5.4% in private equity, and a 3.6% on venture capital investments. Wealthier universities hold riskier portfolios than the average. (See Chart 1.)

Second, average stock prices have increased almost every single year for over 25 years. In spite of the burst of the dot-com bubble in 2000, the inflation-adjusted Dow Jones Industrial Average Index ended 2007 at a level five times higher than in 1982. Even the most passive portfolio manager would have achieved high returns in this stock market. 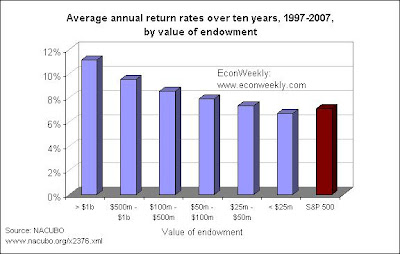 No surprise then that most universities have performed so well. Over the last ten years, the return on most endowments beats the S&P 500 index, which grew at a healthy 7.1% annual rate itself. (See Chart 2.) In the case of the largest portfolios, universities beat the market by a long shot.

News of these fabulous riches has prompted some sectors to demand that universities share more of their wealth. Lawmakers remind them that, as tax-exempt institutions, “they’re supposed to offer public benefit in return for (that) exemption.” Private foundations, which are also tax-exempt, are required by law to spend 5% each year; the average for colleges is 4.6%, with little variation across levels of wealth (see data). Parents, on the other hand, don’t understand why tuition keeps going up while universities continue to amass wealth. Little do they suspect that the cost of college is stoked by the self-interest of parents and students themselves, not that of universities.

The classic explanation for the rise of tuition is that the college premium —the positive gap between the earnings of college graduates and high school graduates— has increased the demand for college education, thereby raising its equilibrium price.

More interestingly, the stock market has also made tuition rates go up, according to a paper* by my former colleague at the University of Chicago Pablo Peña (pdf). Rises in asset prices increase the amount of resources available to universities. Part of that wealth is spent on inputs that improve the quality of education: more and better qualified professors, and newer and more sophisticated facilities, such as labs, computers and libraries, for instance. Higher quality, in turn, increases the amount of human capital accumulated in college, and ultimately affects life-time earnings, i.e. the returns to education. Prestige considerations may be at work too: celebrity professors and state-of-the-art facilities increase the reputation of the institution, adding to the value of the diploma. Therefore, larger endowments spur the demand for college education, and drive up tuition rates.

Differences in the value of endowments across universities are vast: the combined value of the top ten colleges represents 35% of total endowment assets. In light of Pablo’s theory, the implications of this inequality depend on what universities and colleges spend their money on.

If they continue to use their wealth to improve the quality of the service they provide, demand for college education and tuition levels will continue to rise. Differences in tuition rates and education quality between top-notch and second-tier institutions will continue to widen too, since endowments and asset returns are highly concentrated. Also, because the ablest students —those with highest SAT scores or best records of achievement in high school— benefit the most from the quality of college education, the matching of the best students with the best institutions will intensify. Differences in the quality of students across colleges will increase.

On the other hand, universities could start using their endowments to increase capacity or subsidize the cost of college. In this unlikely scenario, the equilibrium price of higher education will probably decline, the quality of college education will drop, and the college premium —the earnings of college graduates vis-à-vis high-school graduates— will drop.

Selected institutions have recently been announcing that they will increase financial aid. Recent announcements might suggest that this could actually happen among selected institutions. Harvard and Dartmouth have eliminated loans from their aid packages and will be giving grants instead; and Yale has followed in their footsteps. These de facto cuts in average tuition rates are not going to change the system. First, they won’t change the quality of education at top universities, for which the foregone tuition revenue is peanuts. Second, they won’t reduce the cost of attendance of the average college student, because the number of institutions that can afford foregoing tuition revenues is small.

But improved aid packages at top schools will make their programs affordable to the brightest students, regardless of their financial situation. If the newfound altruism of the Harvards and Yales has any effect, that will be an even more pronounced assortative matching of colleges and applicants by quality. The scope of these developments is very limited, but it’s good news —at least for believers, like myself, in a free, merit-based education system.

Email ThisBlogThis!Share to TwitterShare to FacebookShare to Pinterest
Labels: education

Dear Francisco,
Since you are in the home stretch of your PhD (as your profile says), I guess you must be using this blog to sharpen your writing and reporting skills, perhaps before taking a job in the private sector.

So let me give you a tip: don't use 3D graphs. Especially don't use them when there is no third dimension to show.

Have a look at the books by this man
http://www.edwardtufte.com/tufte/
Or the graphs produced by, say, the central banks of larger countries. You will not see fake third dimensions in their graphs. Grad school doesn't teach you how to draw the right graph for the purpose, but it is an important skill to learn.

Thanks a lot for your constructive criticism of my graphs. It is true that in grad school they don't teach these things.

The purpose of this blog is, as you say, to sharpen my writing skills. Other purposes are: to raise my profile, and to force me to think about and understand economic issues regularly, as opposed to simply read about them. I strongly believe that you don't understand something until you try to explain it to somebody else.

I'll have a look at Tufte's work and learn why I shouldn't use 3D graphs. The only reason I'm doing it is that they look more sleek (I guess that's why newspapers and magazines use them).

Thanks for the comment, and come back to EconWeekly.

Dear Francisco,
Yes, I did come back, partly to point out that the better newspapers and magazines do not use 3D graphs for this purpose. Check out the Financial Times, Wall Street Journal or the New York Times (eg, the graph linked from their latest labor force story http://www.nytimes.com/2008/02/02/business/02econ.html?ref=business).
Check out any of the central bank publications.

3D graphs look "fancy" (I guess that's what you mean by "sleek") but they serve only to obscure information.

By the way, I agree that explaining something to someone else is the best way to refine one's own understanding. So best of luck with it.