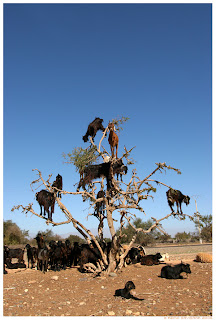 As goats on a tree, reaching for the best leaves, we all strive to be the ones at the top. But even in America, the land of opportunity, only good climbers make it. And lately even the fittest seem to be having a hard time.

The table below shows the percentage of people who moved from a given group in the income distribution to any other one, between 1994 and 2004. (The data come from the Panel Study of Income Dynamics, and the income measure is household taxable earnings.) The lowest degree of income mobility occurs among the poorest and the wealthiest: 58% of households in the bottom 20% of the distribution stay there, and 60% of those in the wealthiest quintile don’t move either.

Pooling people from all ages together, however, can be misleading. The typical earnings profile over a lifetime is hump-shaped: earnings start low, rise up until the individual is in her 50s, then begin a slow decline, and fall sharply with retirement. Because of this non-monotonicity, movements up and down the earnings distribution may have little to do with climbing the social ladder.

As an example: suppose the economy is populated by two individuals, one of whom is 35 and earns $45,000, and the other one is 55 and makes $75,000. So the older person is at the top of the distribution. Ten years later, the young individual has accumulated experience and earns $65,000, whereas the older person, now 65, has retired and doesn’t earn any labor income. The younger individual is at the top of the earnings distribution now. If we were oblivious to the age of these individuals, this two-person society would look remarkably mobile: the poorer person moved to the top and vice versa. In reality, the observed mobility is the product of the normal course of earnings over peoples’ lives.

The fortunes of a person are more likely to change early in life. Twentysomethings are less likely to be attached to a house, a family, or a job. They job-hop, experiment, go back to school. Over time, some people land a dream job —or a “comfort job”— and stay there. And some others simply grow roots: they have mortgages to pay, and spouses and kids to drag along. We also become more risk averse with age.

Things get much more interesting when I look at mobility within education groups. Schooling is probably the single most important factor determining a person’s chance to “make it.” People with less education are less employable. They also experience smaller changes in productivity, so their earnings curve is less steep. And they have fewer opportunities to fill high-powered positions —the sort that provide a pay boost if one is successful. In this, however, the evidence doesn't support my expectations. 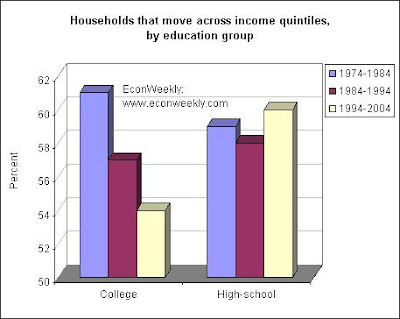 What made the economic ladder more slippery for college grads? Following the reasoning above, maybe people have less appetite for risk, and are taking jobs that are safer but also offer fewer opportunities to leap-frog over income classes. Starting up a business, for instance, is one of the riskiest endeavors one could pursue. But statistics show that animal spirits have not subdued —the fraction of entrepreneurs and self-employed has risen over the last 30 years.

A second explanation is that unobserved ability, not education, is behind opportunity. A couple of decades ago earning a college degree was a major feat. Only the well-off, highly-motivated and bright ever put their feet in a University. Nowadays going to college is almost a given. As a result a college degree has become a weaker signal of one’s competence. Highly capable individuals still get ahead, but the vast majority of college graduates do not belong to that breed.

Finally, but not less importantly, it might be a problem of too many grads chasing too few jobs with incentive-based pay. In spite of all the talk about stock options, the number of positions with (significant) variable compensation has grown more slowly than the body of individuals with a University diploma. More well-educated people land jobs without the power or the incentives to rise fast on the pay scale.

This calcification of the white-collar society is worrying. More and more individuals go to graduate school in order to earn that M.B.A., M.A., or even Ph.D., that will give them an edge over their peers. That behavior is perfectly rational, and yet self-defeating. The latest batches of college grads remind me of hamsters on a wheel rather than goats.