On the cost of reducing CO2 emissions

I read in the newspaper that the Japanese were turning down the air conditioning to conserve energy this summer. Their government estimated that raising office temperatures from 79.2 to 82 degrees would reduce carbon dioxide emissions by 2.9 million tons between June and September -a typical household releases 0.5 tons of the gas in one month. (WSJ article; read it here if you're not a subscriber.)

To stay cool, office workers were tossing suits and ties, waving paper fans, and applying cooling pads to their foreheads. Some people just couldn’t stand it -82 degrees “is an energy-saving environment –not a human environment.”

I admire Japan’s commitment to save the planet, but this measure strikes me as foolish. I’m sure it's less costly to improve the efficiency of some crumbling power plant in Russia instead. Is it?

Vattenfall, a Swedish utility, has estimated the average cost of reducing one ton of CO2 emissions in different regions of the world. (Yes, what is relevant are the marginal costs, but I don’t have data on those.)

It turns out that the costs of reducing pollution are lower in rich countries than in developing ones (see chart). The differences are large. For example, it costs almost twice as much to reduce emissions in China as it does in North America. 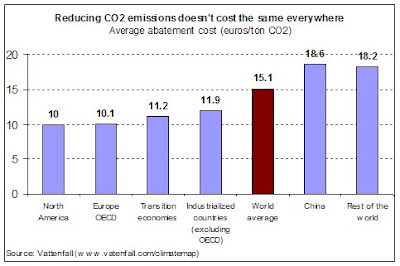 Vattenfall doesn’t disclose the methodology of its study, but others have confirmed the result. David Maradan and Anatoli Vassiliev of the University of Geneva report in a 2005 research paper that marginal abatement costs, in terms of Gross Domestic Product, are 4.5 times higher among the poorest countries than among the wealthiest ones.

Jayant Sathaye and Amol Phadke of the Berkeley National Laboratory calculate the cost of reducing emissions in India trough the use of liquefied natural gas (LNG) plants in place of coal plants –natural gas is cleaner than coal. They find that the cost of producing electricity with LNG is higher in India than in the US, but that running coal-fueled plants costs the same in both countries. Therefore, abating pollution by switching to natural gas is cheaper in America.

There are multiple reasons for this finding. For example, differences in the cost and heating value of fuels, and tariffs on imported equipment. Costs of capital and financing are less likely to play a role, since capital is so mobile.

Whatever the reasons are, if the chart above is more or less correct, then the richest countries in the world are emitting too much CO2, and developing ones are releasing too little.

A global cap-and-trade system would greatly benefit the US. In such a system, each participant receives a limited number of emission rights, and is allowed to buy and sell those in the market. Because abating emissions is cheaper here, the US would sell its unused allowances to developing countries and thus receive big transfers from them.

Greg Mankiw says that a cap-and-trade system would result in a “large transfer of national income [from Americans] to the Chinese.” He’s assuming, correctly I think, that allowances would be allocated based on current population or on historical emissions. Mankiw concludes that, because the US now emits more CO2 per person than China, Americans would have to buy allowances from them. But the question is not how much we are polluting now, but how much CO2 we would be emitting in a world where countries can trade emission rights. And in that hypothetical world, the US would be a net winner.

The vision of coal-fired power plants in China spewing pitch-black fumes without control is dreadful. But it seems like it’s in the world’s best interest to keep them running, and pay the Japanese to turn down their air conditioners.

Does it seem right that abatement costs are lower in developing countries? Why do you think that is? Would the US benefit from a global cap-and-trade system, as opposed to a carbon tax? Leave your answers, or whatever you have to say, in the comments.

Email ThisBlogThis!Share to TwitterShare to FacebookShare to Pinterest
Labels: environment

which means that the developing world would be a net loser.

Either way, it is not politically feasible to implement a global cap-and-trade system, as Mankiw says.