News and the economy

You must have noticed how downbeat the tone of economic news has become recently. In August, reporters sounded concerned, then became gloomy, and now they’re definitely fretful. At this pace, by the end of October we’ll have a depression.

Housing prices are collapsing like a soufflé and, according to the news, they’re taking private spending and employment with them. We’ve been pounded with this story for weeks. Check out this headline on the front page of Wednesday’s Wall Street Journal: “Housing chill grows worse, bites consumers.” The rest of the article doesn’t get any warmer.

And yet I don’t think anybody, basing their conclusions exclusively on the available data, would be that pessimistic. Robert Lucas had soothing words for us a few days ago. (Read them here, via Mark Thoma.) Consumer spending in August, reported today, rose by 0.6 percent, the highest increase in the last four months. Can journalists foresee things that the rest of us can’t? Or could they just be dragging us into a recession with their rash predictions, one headline at a time?

A popular way to gauge the influence of the newspapers is to check how the number of stories that contain the word “recession” correlate with the business cycle. The Economist’s R-word index must have been the first of its kind. 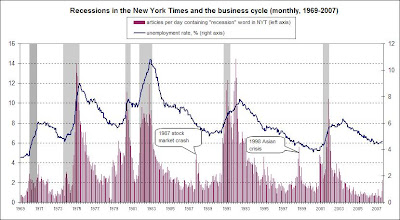 Current macroeconomic statistics are only known with months of delay. The news, on the other hand, are available instantly. They even seem to provide a glimpse of the future. Look at the chart above. My own R-word index shoots up right before the beginning of recessions and peaks near the end of such episodes. It also leads changes in the unemployment rate.

The contribution of the media to public opinion, however, is not to provide more accurate or more timely forecasts -journalists don’t have clearer crystal balls than economists, and they use the same hard data as the rest of us. Their effect comes from interpreting and opining, and choosing the tone of their writing. And they tend to be a trigger-happy bunch –big splashes of bad news sell better than timid guesswork.

The question of whether the media have some influence on economic ups and downs has worried politicians before. When Alfred Kahn was President Carter’s economic advisor, the White House got upset because he mentioned the possibility of a recession. So Kahn said, “OK, I’ll call it a ‘banana’ instead. There’s a possibility we’re going to have a big banana.”

Academics have caught up with the idea only recently, perhaps because the internet has made newspaper searches much faster. The most impressive paper I’ve found in this line of research is the one by Mark Doms and Norman Morin of the Federal Reserve of San Francisco and the Fed’s Board of Governors, respectively. Doms and Morin measure news sentiment using a fancier version of the R-word index of The Economist –one that includes news from 30 newspapers and uses words other than “recession,” such as “layoffs” and “economic recovery”, among other improvements.

They find that the media can make the state of the economy look worse than it really is. In fact, they have done it in the past. Look at my chart above: during the mild recession of 1990-91 the New York Times was more downbeat than during the huge oil crises of the 1970s and 1980s. Doms and Morin also find that people give credit to those alarming headlines, as reflected by the correlation between the tone of the news and the Michigan index of consumer sentiment. Because spending is affected by consumer sentiment, the media do aggravate recessions.

Right now the press is actually not as jittery as it was in 1990, or even in 2001, in spite of my gloomy observations at the beginning of this post (talk about shaping the opinion of your readers?). During the month of September the New York Times has run an average of 2.2 articles per day with the R word. That’s much lower than the 4.2 average we saw in the four months preceding the 2001 recession. (See chart.) 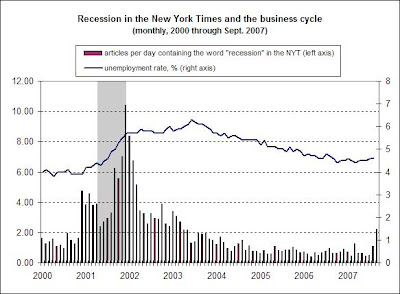 But Doms and Morin’s most fascinating conclusion is that “consumers update their expectations about the economy much more frequently during periods of high news coverage than in periods of low news coverage.” They also confirm what I ventured above: “high news coverage of the economy is concentrated during recessions and immediately after recessions.” So, aside from shaping public opinion directly, the intensity and tone of news coverage determines how much attention people pay to economic news.

We have two hypotheses to explain the combination of those findings. The first one is that people are pessimistic about economic news by nature. Bryan Caplan, blogger at EconLog, has written a book where he analyzes what he calls “pessimistic bias”, among other economic misconceptions. So people only believe bad news because those conform to their (dismal) prior expectations.

The second hypothesis, my favorite, is the notion that people display "optimal inattention”–they update their information only sometimes, on purpose. So, for example, you ignore the evening newscast when it sounds like “business as usual”, but you really open your eyes when you see a headline reading “Recession likely.”

There are several rationales behind optimal inattention. One is that individuals think that bad news, but not good ones, may have an impact on their financial futures. For example, "Citigroup to lay off 3K" makes you worry about keeping your job; but "Citigroup's profit up 32%" does not make you think about a bigger bonus.

Another explanation is that people solve a signal extraction problem. On any given day the news combine truth and noise, so the evidence needs to pile up over weeks or months before the individual is convinced that something is truly happening. Because newspapers insist more on bad economic news than on good ones, it takes a shorter time for individuals to extract the truth in bad times.

I don’t think that we can tell apart these stories using aggregate data. Economists will need to use controlled experiments instead, such as this one, mentioned a while ago by Freakonomics.

But the effort will be worth it. Monetary policy for one could benefit from that research. The task of central bankers depends critically on "anchoring expectations". If we understood how those expectations are shaped by what people read, the Fed's messages could become capable of directing the course of inflation or the economy.

The role of the blogosphere in all this is uncertain. There is some sketchy reasoning out there, and a lot of parroting. My sense is that high-quality posts get more coverage from the parrots than the bad ones, so the blogosphere offers a healthy counterpoint to the mainstream media. But that's only my view. Just in case, I’m going to stop using the word reces… I mean… banana.

Why do you think economic news coverage is higher during bad times? Do you know of estimates of the effect of news bias on the real economy, not just on consumer sentiment? What's the most likely explanation why consumers are "rationally inattentive"? Leave your answers in the comments.