Economics: a dismal and "happyless" science

Every now and then I read some article arguing that money does not make people happy. To support such claim, those articles invoke the results of happiness surveys, which ask respondents in different countries whether they are happy.

The following is a graph of a happiness index vs. income per capita across countries: 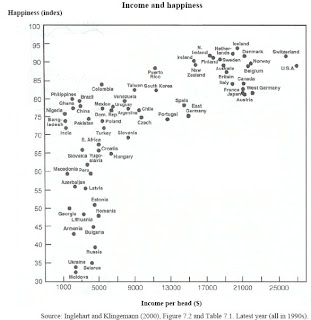 Those happiness surveys always show two stylized facts: first, above a threshold of about $10,000 in income per capita, there is no correlation between the average happiness of a country’s people and its income per capita; second, in countries where the survey has been conducted for several years, people do not get any happier as they grow richer over time.

No problem with that. The problem is the wrong conclusion, either explicit or implicit, that countries where reported happiness is higher have achieved higher levels of well-being and, therefore, have some lesson to teach to the rest of the world.

Subjective happiness and economic well-being have almost nothing in common. Economic well-being is the result of abundance of material resources, health, knowledge, and freedom, all of which unambiguously improve people’s lives. Happiness, on the other hand, is useless as an indicator of economic well-being. As happy as, say, Bangladeshis seem to be, they would enjoy higher levels of economic well-being if they were more literate (59% of adults are illiterate), were better fed (48% of children are underweight), and did not have to cope with so much corruption (Bangladesh is 8th in the ranking of most corrupt countries in the world, according to the corruption perceptions index), just to name a few of the country’s ailments.

Unlike happiness, we can measure economic well-being relatively precisely using objective indicators. I admit that GDP per capita is of limited usefulness. But people have devised composite indices of development. Those indices combine several variables, such as GDP, longevity, child mortality rates, incidence of various diseases, literacy, school enrollment, and air pollution, for example, to produce an indicator of economic well-being that is comparable across countries. The Human Development Index is one example of this type of index.

The measurement of happiness, on the other hand, presents fundamental problems. The question interviewers pose is presumably the same in all countries: “Taking all things together, would you say you are: very happy, quite happy, not very happy, or not at all happy?” But: does happiness mean the same thing across countries? Do interviewees take happiness as meaning satisfaction with their lives as compared with what they think they should have, or rather as compared with what they think they could have?

So, what do we make of the happiness surveys? They could offer guidance to psychologists and social scientists, but not to economists and policymakers. Happiness is a mental state, and it depends more on a person’s social background and expectations than on material resources, at least beyond a certain level of economic development. Economics is not well-equipped to evaluate public policies on the basis of how much happiness they generate, and it should not pursue to do so. The fact that Americans, for example, are the 3rd richest country but only the 13th happiest in the world, does not necessarily mean that they should redistribute their income, reduce their taxes, build more schools and roads, or slash their crime rate. To be happier, what most Americans need is to be educated about what being happy means and how to achieve it. But that is not the mission of economists.