The minimal effect of the minimum wage

Some economists and journalists say that it will increase joblessness among the poor, some others that it will help those same poor to make a decent living, and politicians cite whatever professional opinion that agrees with the views of their constituency. The likely truth, however, is that raising the minimum wage does not make almost any difference.

Economics textbooks tell you that minimum wages reduce employment among low-wage workers and increase the prices of final goods and services. (Gary Becker and Richard Posner include a summary of these arguments in their Wall Street Journal article.) When employers are forced to pay higher wages they substitute machines for labor, as when they mechanize assembly lines in factories or install self-checkout stations in supermarkets. They also substitute skilled labor -the engineers and computer programmers who operate the new machines- for unskilled labor.

Additionally, when the minimum wage increases, the cost of the new optimal mix of capital and labor becomes higher -otherwise employers would have made the substitution of capital for labor already. Some firms try to keep up their profits by passing the wage increase on to consumers, in the form of higher prices of their goods and services. A few unlucky ones do not remain profitable and either close down or move their operations abroad, further reducing employment. Some firms are never established, and their jobs never created.

The alternative view on the subject is that a minimum wage raise increases the earnings of working families. Moreover, it benefits families at the bottom of the income distribution, thus reducing income inequality.

In this article I will not argue against any of the arguments above. Instead, I will point out certain facts about the US labor market and laws that diminish the impact of a minimum wage hike, to the extent of making it negligible.

1. Low-wage workers in the service industry.

It is very costly, if not outright impossible, to substitute capital for labor in many service industries. Think about how to substitute machines for cooks, waiters and waitresses, teachers, or window cleaners.

The Economic and Policy Institute (EPI) has tabulated the characteristics of the workers that would be affected by the minimum wage increase. (“Affected workers” are all those earning a wage between the state minimum wage and $7.25.) They find that 29 percent of the affected employees work in the leisure and hospitality industries (accommodation and restaurants); another 24 percent work in retail trade. An undisclosed proportion of them work in other service industries.

Because of the high concentration of low-wage workers in service industries, a minimum wage increase will make businesses increase prices or reduce their profit margins, rather than reduce their number of employees.

2. The size of the wage increase and state minimum wage laws.

The increase just approved by the Senate will raise the minimum wage from $5.15 to $7.25, in three increments of 70 cents between 2007 and 2009. Even in inflation-adjusted dollars, the increase appears to be the largest in the last 25 years. The blue line in Figure #1 illustrates this point. (To construct that graph I assume that inflation stays constant at 2.5 percent per year between now and 2010.) 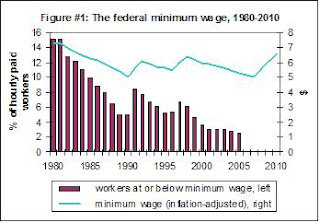 Using the state minimum wage laws and the recently approved federal increase, I have calculated how much the effective minimum wage will have increased in each state, by January 1st of 2010. The EPI has calculated the number of workers who would be affected, by state. Combining my calculations with EPI’s, I have come up a distribution of wage increases. Figure #2 shows this distribution. I find that 49 percent of all affected workers would experience a wage increase of less than 10 percent, and 22 percent would not benefit at all. The wage would increase by less than 20 percent for about 63 percent of all the affected workers. 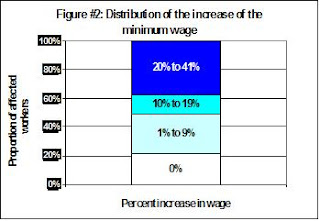 Because of the effectively small effect on the cost of labor, and the declining fraction of the workforce that is affected by the minimum wage, the wage increase will have moderate effects on prices, unemployment, and business closedowns.

According to the EPI figures, 58 percent of the affected employees work part-time; a 30 percent are teenagers; 75 percent are not parents.

For the most part, teenagers and part-timers are not breadwinners; these are people who work either to supplement the income of a first earner or to partially support themselves while in school. Therefore, the claim that “minimum wage increases benefit working families” is mostly false.

Part-time and teenager workers do not conform to the standard definition of “the poor” either. A very large fraction of minimum wage workers are not full-timers who do not have enough earnings to support the basic needs of their families. So the statement that “a minimum wage increase is part of a broad strategy to end poverty” is quite misleading. In this point, I largely coincide with professors Becker and Posner.

As a policy instrument, a minimum wage hike has become a blunt instrument. It does not address its stated objective of helping the poor, discourages entrepreneurial activity, and reduces employment among the unskilled. True enough, all those effects are small, but if the overall effect is negative, why should we increase the minimum wage?

The minimum wage is a recurrent policy instrument for politicians because most voters are not opposed to it. Part of its popularity stems from the fact that, as opposed to the Earned Income Tax Credit (EITC) or the various welfare programs, the direct benefit of a minimum wage raise is easy to understand: people will earn more dollars per hour. Also, as opposed to welfare programs, it rewards hard work, which is a socially respected behavior.

On the other hand, one of the main costs of the minimum wage –higher prices of goods and services- is spread out over a giant, voiceless mass of consumers, and sometimes even forgotten. Raising the minimum wage will drive up the price of your restaurant meals and your dry cleaning by just a few bucks. Added over millions of people, that’s many millions of bucks, but no particular individual gets hurt too much. The other main cost –lower employment rates among unskilled workers- also goes unnoticed, because the thousands of people who cannot find a job as a result of the higher minimum wage are not organized; in fact, they do not even perceive that their joblessness is partially a result of the minimum wage hike.

If the government wants to redistribute income towards the poor, it should adopt a linear negative tax. This is what I mean: choose a level of tax-exempt earnings, say $20,000; any taxpayer earning less than $20,000 receives a transfer equal to the lowest tax rate, say 15 percent, times the difference between their income and the tax-exempt threshold. Taxpayers who do not work full time would not be eligible. This scheme transfers money to low-income families, just like the EITC, but it does not discourage work, because the tax rate is constant.