The wrong way to reduce the number of uninsured Americans

Last week President Bush unveiled the current administration’s master plan to make health insurance more affordable. Under the proposed system, taxpayers would apply a new deduction to their Adjusted Gross Income (AGI), much like the existing deduction for dependents, as long as they enroll in a health care plan. The deduction would amount to $15,000 for families, and $7,500 for individuals.

The proposed plan would do almost nothing to universalize health care coverage. Most people who do not have insurance have relatively low incomes, their marginal tax rates are low and the proposed plan would lead to little or no tax savings for them. For example, a married couple with two children and $40,000 in AGI, who files jointly, would save $1,570 in taxes if they switch from being uninsured to being insured. If their AGI was $20,000 they would not receive a dime, because their taxable income after applying the deductions for dependents would already be negative. (Yes, this family would receive an Earned Income Tax Credit (EITC), but the EITC would not be affected by health insurance status, according to what we know so far about Bush’s plan.) The figure below shows the tax savings for different levels of AGI and family types. 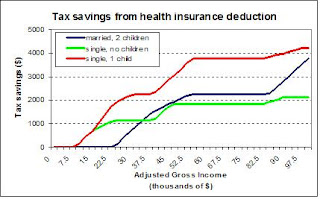 What Bush probably did not realize is that those who would benefit the most from the plan would be single-parent families. This is because single filers face a steeper marginal tax rate profile than married couples, and they would benefit from the $15,000 family health insurance deduction, instead of the $7,500 individual deduction, if they have children. For example, a single parent with one child and $30,000 in AGI would receive a tax cut of $2,200, whereas a married couple with the same income and one child would save $980 in taxes, and an individual without children would get $1,125.

But many uninsured families and individuals have lower incomes than those in the examples above. Using data from the Current Population Survey (CPS) Annual Social and Economic Supplement in 2005 (the latest year for which complete statistics are available), 51 percent of uninsured married couples with two children have incomes below $35,000, and 35 percent of those families take home less than $25,000. (See the graph below, which tells you what percentage of uninsured families have a family income below a given level.) That means that 35 percent of those families would not benefit from Bush’s plan at all, and 16 percent of them would receive a tax cut of less than $1,000. The average tax reduction for this type of family would be $1,285. 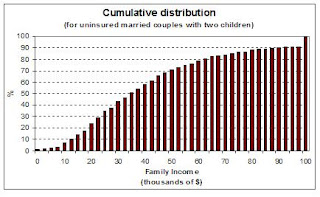 In most cases, the tax savings would be insufficient to finance health insurance. For example, the cheapest health insurance plan I could find, for a family of non-smoking young parents with two children, would cost $2,085 a year. And that is for a health plan with basic coverage and a deductible of $10,200.

Another 7.1 million of uninsured individuals had family incomes above $75,000. Given that affordability is probably not the reason why those people do not have insurance, they would not purchase become insured after receiving a token incentive from the government either.

If the goal is to universalize health insurance, here is what I propose: make participation mandatory, and subsidize it for families and individuals with low income through health vouchers, not through the income tax. And, in order to discourage people from remaining unemployed or under-employed so as to receive subsidized health care, make the subsidy significantly higher for working individuals.
Posted by Francisco on Monday, January 29, 2007

Email ThisBlogThis!Share to TwitterShare to FacebookShare to Pinterest
Labels: health