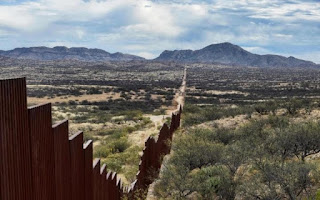 Excellent article on the wall with Mexico, by the Cato Institute.

My questions and comments:


1) Since a) the only effective wall would have to be a fully finished wall from ocean to ocean; b) legal and bureaucratic barriers make it unlikely that the Big Wall (Muro Grande?) gets built within four or even eight years (see the Cato article); and c) political support for a (half-finished) wall would likely decline under the next administration, then how likely is it that this project is a complete waste of taxpayer money?

2) Suppose the wall gets built, somehow, after all. Would then political support for the wall increase or decrease?

3) Once the wall is built, tearing it down looks like an invitation to illegal immigrants. Which arguments could a future president use to persuade voters that it's best to tear down the wall? (The only plausible one I can think of is the cost of maintaining the wall, likely to be in the billions).

Final comment: An effective wall would also have to be the longest, tallest, deepest wall that it’s physically possible to build, which means the most expensive of all possible walls (and even then I question whether it would be effective). But political horizons being relatively short term, it’s unlikely that the super-expensive wall will get built. We’ll wind up with the worst kind of wall: a kind-of-expensive, but ineffective wall.