A recent poll by Chicago Booth (thanks, Tyler!) asked a panel of economists in early December to agree or disagree with the following statement


The Fed should raise its target interest rate when it meets in mid-December.

The respondents (all of whom are "senior faculty at the most elite research universities in the United States") were largely in favor of a hike. Forty-eight percent either agreed or strongly agreed; and 19% disagreed. Nobody disagreed strongly.

Digging through previous questions to the same panel, I found a puzzling result from early April. The question then was:


The Fed should wait until its preferred measure of inflation (Core PCE) is clearly rising — and not just forecast to rise — before it begins hiking interest rates.

Here's how the results of the two polls compare: 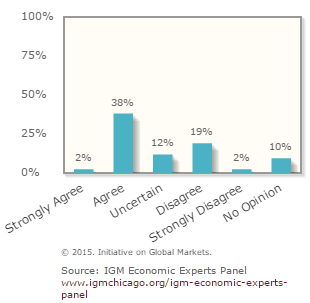 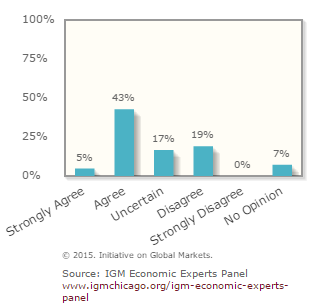 1) Unemployment went down. But I find this hard to believe, because the unemployment rate fell just 0.5% between March and November, and the consensus forecast in March was already that unemployment would go down.

2) Despite the wording of the April question, respondents did have in mind forecast inflation, not just actual inflation. But forecasts of core inflation barely changed between April and December. If anything, medium-term forecasts went down slightly.

3) There is a third (fourth, fifth?) variable in the respondents' mental Taylor rule. However, this additional variable would have to produce a hawkish leaning by December. Output didn't grow particularly fast, in the U.S. or globally. Perhaps a heightened awareness that low interest rates are destabilizing the global financial system? I'm not convinced because, if anything, the consensus is probably that the system is more fragile now than in April. An interest rate hike, at the wrong time, could trigger the crisis.

4) Respondents are concerned about the Fed's credibility. The Fed had been beating the hiking drum from October through December. Doing nothing in December would have undermined the effectiveness of future Fed communications.

5) The respondents, by December, believed that the December hike was largely testimonial, a mere assertion that the Fed is still "in charge," and the hike is to be followed by a gentle tightening cycle. This was not the consensus in April yet.

6) The poll statements are poorly written, because they fail to account for a behavioral bias that makes respondents more likely to agree than disagree with whatever statement they face.

7) Respondents are unconsciously conflating the normative statement with predictions of what the Fed will do. (The consensus prediction shifted dramatically between April and December, mostly because the Fed itself gave strong guidance of an interest rate hike in October and November.)

8) Tyler is right, and economists don't know what they're talking about. Moreover, their ignorant self-confidence produces time-varying biases.

I think a combination of #3, #4, and #5 is most likely, but (as a respondent to opinion polls myself) I can't completely dismiss behavioral biases of the respondents.
Posted by Francisco on Wednesday, December 16, 2015

My explanation is trust in the Fed. In the absence of the Fed announcing a planned rate hike, economists will say the reasonable course of action "only hike interest rates if inflation rises".
Because the Fed has announced that they intend to tighten policy, there must be a reason why they are doing so. There must be some secret indicator that only they know about that shows that inflation is right around the corner. Part of being taken seriously is that you have to trust other serious people and can't rock the boat.

Honestly though, I don't believe in any secret knowledge or special forecasting ability. In the TIPS spread shows low expected inflation, if GDP growth is low, if inflation is low, and if unemployment isn't particularly low, I don't think that any forecast or dataset overrides the presumption that monetary policy doesn't need tightening.

Central banks can and do screw up all the time. Japan's most important, respected economists have been repeating "tighten policy" for 20 years despite a total lack of inflation. If you want 0% inflation, fine, but shouldn't you announce that as the official policy then? Why tell people 2% if your real goal is 0%? Inflation is only like 0.5% right now. If the Fed is tightening, the clear implication is they want outright deflation. The next question to ask is "why?", not to play along and pretend like they are still trying to hit 2%.

I'm thinking that economists have in their head the correct answer to when a central bank should raise interest rates, but can't manage to actually apply that knowledge to real life in the face of social pressure to support a rate hike.

Sum of December Disagree+Unsure+No Opinion=43%. Perhaps, those who Agreed in April are distributed among those 3 categories.