Suppose you are given the following task:

Forecast the real total return of U.S. equities over the next ten years. Show your work. Time: two hours.

This post describes how I would go about fulfilling this assignment.

The "fundamental" \(F\) that goes in the valuation ratio could be anything, but you should probably pick a variable such that:

1) The resulting valuation ratio is "mean reverting" (over the relevant forecasting horizon, in this case ten years), and

2) You can forecast the growth of the "fundamental." Once you pick a particular valuation ratio, you are also committing to forecasting the growth rate of its corresponding fundamental.

Several such valuation ratios have been proposed in the finance literature. I list them in the following table:


The last ratio, price/total income, is really just a generalized version of the price/dividend ratio. I expect the two to be highly correlated, but I'll keep both for now.

Off the top of my head, I would say you can either:

The strategy should depend on (a) how long are your historical time series, and (b) whether you suspect structural changes that shifted those averages over time, or make them drift.

Where should you get the data for this exercise? A lot of people use the Shiller's time series that go back to 1870. You won't get q-ratios or total cash flow or total market capitalization from Shiller's spreadsheet, so you would be limited to the CAPE and the dividend yield as valuation ratios. For today that will suffice.

A cursory inspection of the time series suggests the dividend yield has declined over its entire history, but it seems relatively stable since the late 1990s. I would then use the most recent ten years to forecast the dividend yield over the next ten. 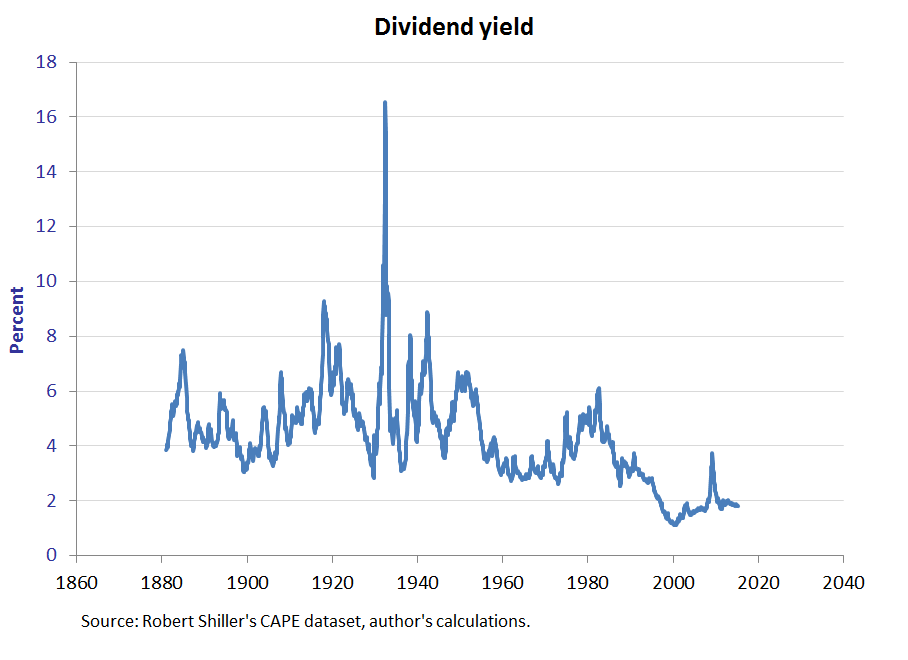 The Shiller dataset is monthly. For each December, I take the 12-month trailing average of the dividend series (column C), and I divide it by the price (column B). That's my estimated dividend yield for the year ended in December. Next I calculate the geometric average of the dividend yield between 2005 and 2014, which is 2.0082%. So my forecast for \(\widehat{dy}_{t+1, t+10}\) is 0.02.

Next, the valuation ratio. Let's start with the CAPE (cyclically-adjusted PE ratio). The chart below shows that the historical average (in green, 16.6) is much below today's CAPE (27.85) and also below today's ten-year rolling average (in red, 22.6). It does seem like the CAPE shifted upward sometime in the 1980s or 1990s, but we don't know whether that shift is permanent. We can use both the historical average and the ten-year rolling average to come up with alternative forecasts of the CAPE ten years from now. 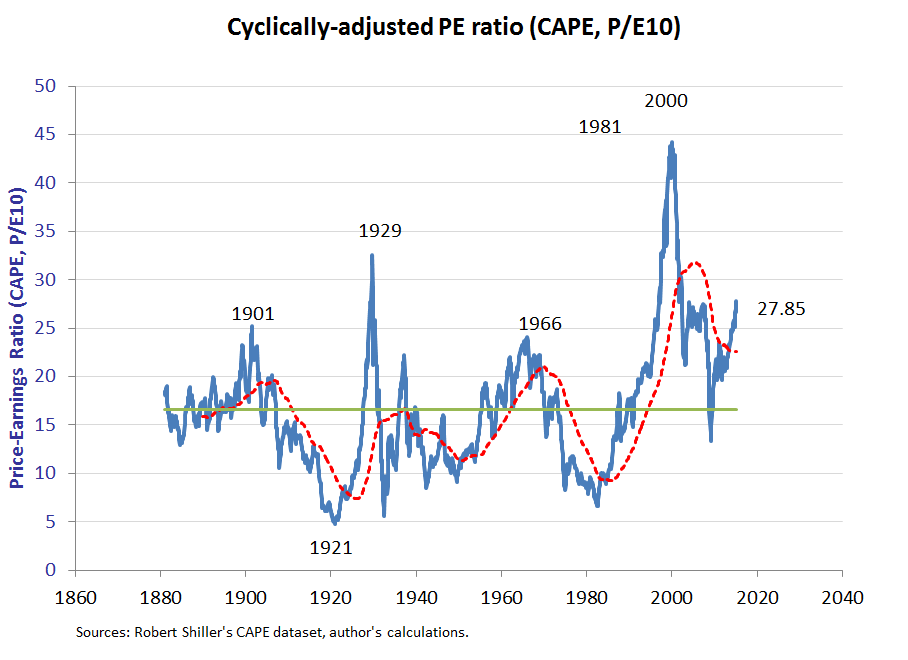