Africa had it good for ten years. Income per person adjusted for inflation, which declined in the 1980s and 1990s, rose almost 30% between 2000 and 2010. In Ethiopia and Angola real average income doubled—after zero growth in the previous twenty years. Glitzy shops and skyscrapers have replaced drab neighborhoods, and new millionaires have sprouted out of nowhere. A single decade has seen the continent go from basket case to basking in the narrative of “Africa Rising.”


Africa owes its growth spurt to a windfall of high commodity prices and low interest rates. China alone has changed the fortune of the entire continent, buying increasing amounts of natural resources, providing cheap loans, and stimulating foreign direct investment. But the manna is running out.

China won’t grow at 7% per year forever. The recent surges of credit, capital spending, and housing prices are simply unsustainable. Aging will soon catch up to the Red Dragon, after decades of one-child policy. Plain mean reversion, according to a new paper by Lant Pritchett and Larry Summers, will lower China’s and India’s average growth to 3% or 4%. Even a growth rate between 4% and 7%, as most forecasters project, would imply a sharp slowdown for African exports, compared with the roaring 2000s.

Africa has already felt the bite. Oil prices crashed in 2009 and, despite a partial rebound through 2011, they’ve been overall flat since then. A sluggish global recovery means that African oil production dwindled to 9.3 million barrels per day in 2013 from 10.7 million in 2010. The GSCI precious metals index has fallen 20% since 2011. The prices of cash crops such as cotton, coffee, and cocoa are all lower than four years ago. GDP growth, naturally, has suffered: sub-Saharan Africa’s has slowed to 5.1% this year from 6.9% in 2010, according to the International Monetary Fund.

Restarting the commodity boom doesn’t guarantee Africa’s success. In resource-led economies manufacturing tends to shrivel. Mining hogs capital. Foreign purchases of commodities push up the
exchange rate, which  raises the foreign price of  goods and renders domestic firms uncompetitive. Labor goes under-utilized, since digging and drilling employ few bodies. The gains from mining wind up in the hands of a minority, failing to create a broad base for domestic demand.

The normal engine of development is industrialization. Almost every large country that has become rich has, along the way, industrialized. That’s what happened in 19th-century England, early 20th-century North America, post-war peripheral Europe, and Asia-Pacific. It’s not an economic law that a country must industrialize to become rich, but history shows that other paths are seldom walked.

Industrialization drives development because labor moves from low-productivity jobs (typically in agriculture) to high-productivity ones. Even if output per hour is stagnant within sectors, simply shifting workers to the more productive uses raises total growth.

But Africa, it turns out, is de-industrializing. Manufacturing is now smaller as a share of GDP than in 1974 (Exhibit 1). Fewer than 8% of workers toil in a factory making goods, and the number is falling.In sub-Saharan Africa, between 1990 and 2005, workers seem to have shifted towards lower-productivity jobs. That retrogression lowered growth by 1.3 percentage points per year, according to a 2011 paper by Margaret McMillan and Dani Rodrik. Shifting workers to high productivity jobs, by contrast, lifted Asia’s rate of growth by 0.6 points. 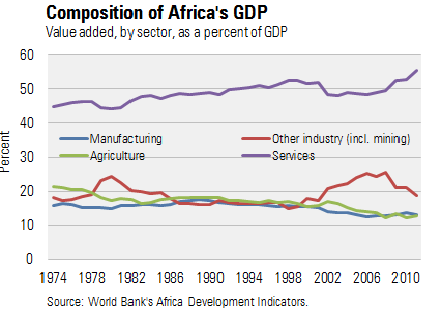 Globalization  may be to blame. In Japan, Korea, and China, international trade fostered progress. Modern technologies were adopted; power lines and railroads were laid out; rural workers left the field for the factory.

In sub-Saharan Africa, however, globalization had the opposite effect. Dani Rodrik, a leading development economist, has argued that competition wiped out many African firms, while the rest had to downsize. Nigeria’s garment industry couldn’t compete with Chinese textiles; South Africa’s industry withered during the 1990s, just as Asia’s was rising.

Foreign competition may have even lowered productivity. Rodrik thinks some of the surviving factories went underground. As a result, many African goods are made in illicit sweatshops, which have little access to capital and produce low-tech goods.

Most of the redundant factory hands, however, found work in services, mostly informal. Almost 80% of working people in sub-Saharan Africa have “vulnerable” jobs—meaning, as defined by the International Labor Organization, that they’re self-employed or contribute to the family business. Raising human capital under those conditions is difficult.

The sad upshot is that, even in periods of strong global growth, like 2001–2007, Africa falls further and further behind the world’s productivity frontier. In 1997 Angola’s output per worker was about half of China’s, adjusted for purchasing power parity. Ten years later, despite stellar growth, the ratio was ten percentage points lower. In Mozambique, another fast-rising country, relative  productivity fell to 52% from 72%.

Can Africa rekindle industrialization? Many analysts will tell you that “institutional factors” get in the way. Red tape, legal insecurity, and poor infrastructure discourage investment. Every year African countries fill the bottom rungs of “ease of doing business” rankings. Pervasive corruption doesn’t help.

But that’s not what’s holding back Africa. Industrialization and ease-of-doing-business are, after all, a chicken-or-egg problem: countries don’t get more business friendly before they get richer. Plus, Asian manufacturing thrived amid lax law enforcement and rickety infrastructure.

Rodrik puts his finger on several items that may actually decide the fate of African industry. The first one is the exchange rate. Angolan goods might compete with Malaysian exports— if only the kwanza  was cheap enough. An undervalued currency is a subsidy on tradable-good industries, and offsets the difficulty of doing business. The right mix of fiscal and monetary policy would achieve a competitive exchange rate.

A second thing policymakers can do is unshackle the labor market. McMillan and Rodrik find evidence that countries with flexible labor markets experience productivity-raising development.
On the other hand, some hurdles to progress are beyond the policymakers’ reach. One handicap is the aforementioned curse of natural resources, which suck the life out of manufacturing. Another obstacle is that industrialization is getting harder for everyone.

In a recent article for the Milken Institute Review, Rodrik says that when manufacturing peaked in Britain and Germany it employed nearly a third of the labor force. Korea’s industry never topped a 30% share. India and Latin America have recently peaked at less than 20%. Most strikingly is that in countries that are hardly rich or industrialized, such as Vietnam, manufacturing is already losing ground!

As the global demand for goods declines relative to services, competition among the world’s factories will get stiffer. In those circumstances African producers will have a tough time carving market share away from Chinese or Mexican manufacturers. Besides, labor-saving technology means that factories need fewer and fewer workers.

Would services lead growth instead? Tradable services seem a nonstarter. Most exportable, high-productivity services are delivered by highly educated people, Rodrik notes. Services like programming, engineering, medical diagnosis, and finance call for advanced degrees, on which the continent is short. Africa is unlikely to be the next India, which is leaping from a rural to a services-based economy.

Many non-tradable services in Africa today—retail, personal services, transportation—can be performed by relatively unskilled people. The problem here is demand. For all the talk of soaring income per capita, 70% of sub-Saharan Africa still lives on less than $2 a day. The natural resource boon has blessed a thin minority, typically connected to mining, construction, government, or all of the above. Among the vast majority, few hold a formal, salaried job. Lacking steady, adequate earnings, consumers won’t spend much on services—or on anything else.

What future, then, awaits Africa? Two scenarios are possible. One, the continent keeps growing, but falls short of an economic revolution. Industrialization doesn’t jell, and Africa’s lot improves through a mix of resource exports and a mild rise of overall productivity, while falling further behind the world’s economic frontier.

In the alternative scenario, Africa does have a growth miracle, by adopting a development model that we’ve never seen before. Somehow,  by using new technologies or providing yet-unimagined goods and services on which Africa holds still-unknown comparative advantages, the continent catapults itself to high-income status. It's a stretch of the imagination for me, but never underestimate human creativity.

*This is an edited version of an article I wrote for the Dec/Jan issue of Morningstar magazine, my employer's publication.
Posted by Francisco on Monday, November 17, 2014