“Macroeconomics without the financial cycle is like Hamlet without the prince,” says Claudio Borio, Head of the Economic and Monetary Department of the Bank for International Settlements in Basel. Borio has long argued that the business cycle alone can’t explain some features of expansions and recessions. The Great Depression and the prolonged decline of Japan in the 2000s were unusual because financial factors were at play. Likewise, to understand the poor growth of advanced economies since 2007 one must look at the interaction between asset prices, debt, and the real economy. Borio and the BIS have lead this research agenda, tracing the links between financial and business cycles.

The “financial cycle” isn’t a new idea, of course. Hyman Minsky and Arthur Kindleberger became well-known for their work on credit cycles and market manias. Michael Bordo, Guillermo Calvo, Gary Gorton, and Carmen Reinhart, to name just a few, all had done important research on financial vulnerabilities by the early 2000s. Franklin Allen and Douglas Gale did the work for their book “Understanding financial crises” well before 2007.

But, for the best part of the 20th century, mainstream macro models didn’t integrate the financial sector, as Calvo (2013) recounts beautifully. Financial capital in those models was allocated, without a hiccup, in aseptic markets. Most models ignored banks altogether. Only after the earthquake of 2008-2009 have economists rediscovered the role of financial factors in macroeconomics. Today the economics department of every major bank tracks macro-financial risks.

BIS updates are required reading if you want to keep an eye on the global financial cycle. This year’s Annual Report includes a riveting chapter on it, based on Borio’s research, which forms the basis for this column.

What is the financial cycle?

What is this “financial cycle” anyways? There’s no set definition, but for Borio it stands for medium-term fluctuations in financial variables. Those fluctuations come with “self-reinforcing interactions between perceptions of value and risk, attitudes toward risk, and financing constraints, which translate into booms followed by busts” (Borio (2012)).

In plainer English: Rapid increases in credit lift property prices, which in turn increase the value of collateral and thus potential credit. The rising supply of credit relaxes financing constraints, whereas higher property prices change how investors perceive value and risk. Those interactions aggravate swings of real variables (output, profits, employment, etc.), and distort how capital spending is allocated across industries. The cycle usually ends in financial distress or even a crisis. Asset values plunge, and borrowers reduce their leverage, until the expected return on capital rises enough to lure investors back in.

Five features of the financial cycle stand out. First, it’s much slower than the business cycle. Two or three recessions typically go by, over 15 to 20 years, before a full financial cycle is through. Drehmann, Borio, and Katsaronis (2012), studying seven mature economies between 1960 and 2011, find that the average cycle lasted 16 years. The United Kingdom, for instance, experienced only three financial peaks in that period (in 1973, 1991, and 2009).

The second feature is that peaks in the financial cycle are typically followed by systemic financial stress. After many years of rising asset prices and growing debt, asset values are out of kilter with fundamentals. If a shock then makes credit contract, or leads investors to reassess value and risk, the value of collateral plummets and borrowers can’t service their debt. Severe distress or an outright banking crisis follows.

The third feature —and a direct result of the second— is that recessions are deeper when they coincide with the contraction phase of the financial cycle. Drehmann, Borio, and Katsaronis (2012) find that, on average, gross domestic product drops 50% more than in regular recessions (-3.4% versus -2.2%).

Fourth, the length and amplitude of the financial cycle depend on background conditions. For instance, a lightly regulated financial industry eases financial constraints, which speeds up the loop between investors’ views on value and risk, risk tolerance, and funding conditions. Similarly, if monetary authorities put the emphasis on reigning short-term inflation, interest rates will be too low when financial booms develop in a low-inflation environment. As another example, globalization may have made potential output seem higher, and inflation lower, than their sustainable levels, stoking credit growth and asset prices.

Fifth, and last, financial cycles are often in sync. That’s because common factors drive cycles across countries. Financial capital moves across borders, equalizing risk premia and funding conditions. As a result, financial crises happen in groups. Lowering barriers to foreign investment has only intensified this clustering.

Where are we now?

Where are we in the financial cycle? To trace its path, Borio and his colleagues use the medium-term co-movement of three things: credit to the non-financial sector, the credit-to-GDP ratio, and real housing prices. The medium-term component is extracted from each individual series using a technique called bandpass filtering, which removes fluctuations with a frequency shorter than 8 years, or longer than 30. Then a simple average rolls the three filtered series into one.

Using data through 2013, the BIS Annual Report finds that countries are at different stages (see Figure 1). Southern Europe is in the downswing phase of the cycle. In that region –Spain, Portugal, Italy, and Greece— the global recession was the preamble to the 2010 sovereign debt crisis, when the cycle peaked (a little earlier in Greece). In 2014 I see that real property prices and credit are still falling, but at decreasing rates. 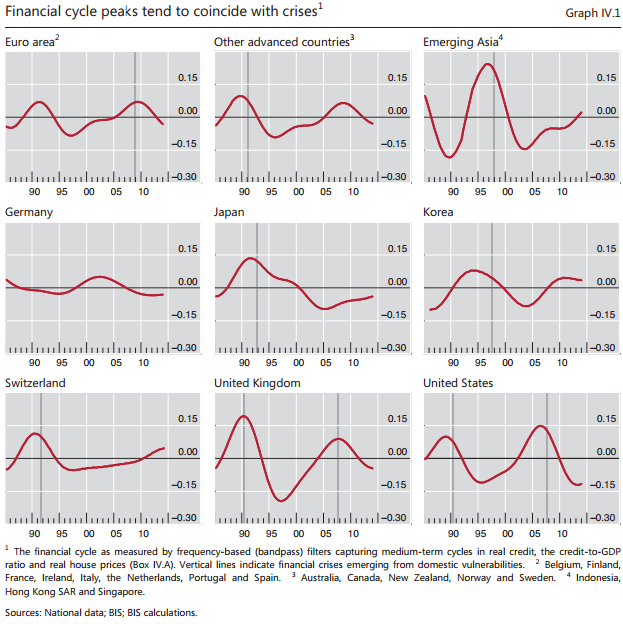 Credit and property prices in the United States and the United Kingdom bottomed out recently, and are now clearly recovering. Japan is on the rising phase too, but its current cycle began in 2005. Much further ahead in the expansion are Canada and Australia, where the financial cycle merely took a pause in 2007-2009. Switzerland is in a “boom.”

Clearly booming as well are some emerging markets (EMs): China, Brazil, Turkey, and Asia-Pacific. (Asia-Pacific here includes: Hong Kong, Indonesia, Malaysia, Philippines, Singapore, and Thailand. The report doesn’t include Latin American countries, other than Brazil.) In those countries the current financial cycle started in the early 2000s, after the Asian financial crisis. The cycle continues today, briefly interrupted by the fallout from the 2008-2009 crisis.

In the U.S., U.K., and other countries where the cycle peaked in 2007, monetary easing cushioned the fall. In countries , on the other hand, that didn’t have a financial crisis, the surge of global liquidity has catapulted borrowing and housing values. And, almost everywhere, low interest rates have inflated equity prices and raised risk tolerance. Monetary stimulus is not a free lunch.

What might kill those booms? Rising interest rates are a prime concern, as seen in the summer of 2013. India, Indonesia, Brazil, and a few other EMs had a mini-crisis on the mere possibility the Federal Reserve would begin tapering asset purchases. In 2015, both the Fed and the Bank of England will likely raise policy rates, although they will loudly telegraph the move well before it happens.

Another worry is a sharp fall of income. That would make debt more difficult to service. Commodity exporters nearing boom-like conditions—Australia, Canada, Norway, Latin America—would be at risk of a financial crisis if China’s demand slowed down quickly.

One more source of fragility, as the BIS report says, is the clout of asset managers. Large investment funds account for a significant share of all EM assets. Even a small reallocation of their portfolios can trigger large price swings. The rise of indexed products makes this matter worse. Also, the shift towards exchange-traded funds (ETF) may have made the market more volatile, as more and more investors view EM ETFs as liquid, short-term positions (Figure 2). 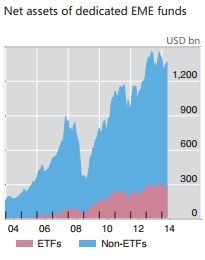 Timing the market is just as difficult as forecasting the peak of the financial cycle. Early warning signals exist, but no dashboard is infallible. Most predictions of financial downturns come months or years too early. Claudio Borio himself warned of financial vulnerabilities in 2003, four years too soon. When the wolf fails to show up, the sheep keep on partying. Next time won’t be different.

Borio, Claudio (2012), “The financial cycle and macroeconomics: What have learned?,” BIS Working Papers, 395.

Calvo, Guillermo (2013), “Puzzling over the anatomy of crisis: Liquidity and the veil of finance,” Columbia University, mimeo.

*This article was prepared for the October/November issue of Morningstar magazine, my employer's publication.
Posted by Francisco on Friday, August 29, 2014