I was surprised by this chart, a version of which I originally saw on FT Alphaville:


It shows the impressive rise of the female employment rate in Japan, both in absolute terms and relative to the U.S. The participation employment-population ratio is now higher in Japan than in the U.S., which is something I didn't expect.

The article is perhaps too quick to chalk up this rise to Abenomics. The timing is right, but I'm skeptical that the handful of policies introduced by Abe have overcome Japan's cultural biases and institutional barriers so quickly.

How about the gap between the male and female employment rates? The FT article highlights the "20 percentage-point difference" in Japan. Is that normal?

So, the female participation employment rate in Japan is now in line with that of other rich countries, but the gap between men and women is still quite higher. 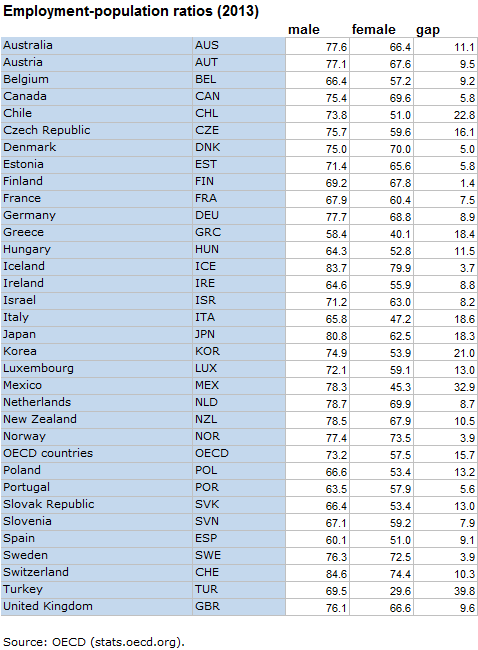 Edited on 8/14/14, at 4:15pm CT, to replace "participation rate" with "employment-population ratio" (or simply, "employment rate"). They're not the same thing. Sorry about that.
Posted by Francisco on Thursday, August 14, 2014