What caught my eye

1. Benjamin Friedman describes the perils of downsizing the central bank's balance sheet. It wasn't my first guess, though. Friedman argues that, by holding an assortment of assets, central banks have acquired a new tool to fine-tune monetary policy.

2. A three-part essay on alternative measures of inflation, on the website of the Atlanta Fed, by Mike Bryan, the father of the trimmed CPI and the median CPI.

3. Australia proposes to raise the retirement age to... 70! (on Bloomberg)

4. Excellent review of the consensus view why the "natural" interest rate has tumbled, by Larry Summers (via John Cochrane).

5. The TIOBE index: the most popular programming languages. 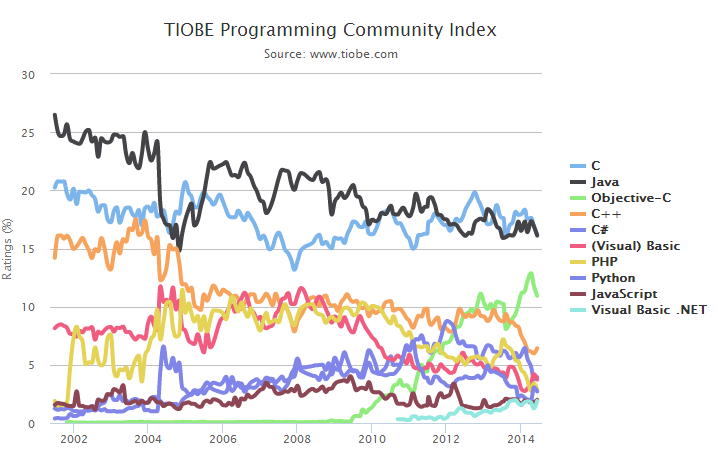 6. A comparison of programming languages in economics, by Aruoba and Fernández-Villaverde, from this week's batch of NBER working papers.

7. Can productivity rise forever? A partial discussion of the main issues, by Robin Harding at the FT.

8. Repeat after me: banks do not "lend out" reserves, by Paul Sheard at S&P, via David Andolfatto. David commented on Sheard's note, and was quickly corrected by Nick Rowe. David has now written a simple model to think through the issue of excess reserves and inflation risk. Don't you love economics blogs??
Posted by Francisco on Tuesday, July 01, 2014