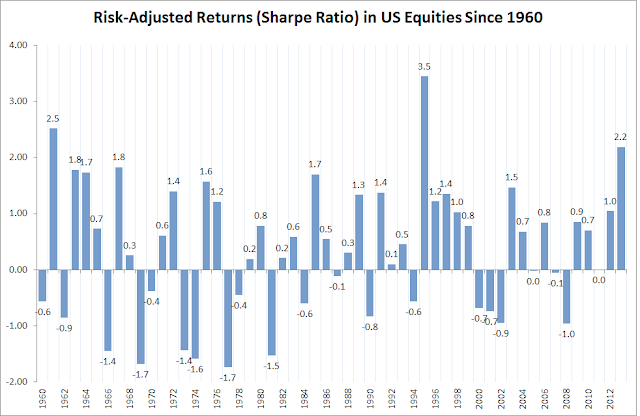 This is by Gavyn Davies at the Financial Times. In his article, Davies ponders whether the bull market can last another year.

I am a little alarmed by this:


"...there is an unusually strong consensus in analysts’ forecasts for next year, with almost everyone expecting stronger global GDP growth, dovish central banks and further rises in equity markets. As John says, this “cozy consensus” borders on complacency."

Such a widespread bullish sentiment has often be a preamble to short-term corrections. Although,


"Past returns do not help us very much to predict the out-turn for 2014."


"Nor are valuation signals are very helpful in picking the top of a bull market, except when they are at extremes.That is not the case at present."


"Research on identifying bubbles by new econometric techniques (which I will write more about in the near future) is also re-assuring. It suggests that the probability that the US equity market is currently in a bubble is less than 20 per cent."

In the rest of the article Davies turns to estimations of the output gap, and to the monetary policy outlook.
Posted by Francisco on Sunday, December 15, 2013