1. Why the poor don't work, by Jordan Weissmann in The Atlantic (hat tip to Tyler Cowen at MR).

4. Results of the German election in Berlin. The wall's still there: 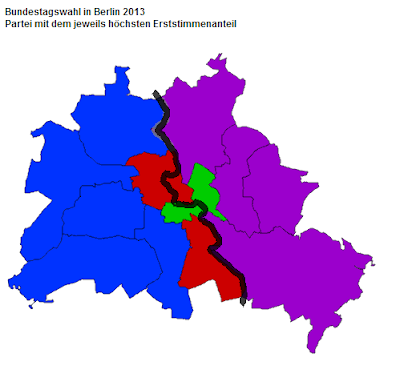 The black line is a "very rough approximation" of the Berlin wall's route.

From the an entry by Michael Steen on the FT blog "The World":


This is a map, courtesy of the Berlin returning officer’s website, of the constituency votes in Berlin. Blue is the Christian Democratic Union of Angela Merkel and purple represents the Left party, which was formed from the remnants of the communist SED that ruled East Germany as well as leftwing defectors from the centre-left SPD, shown in red. (The Greens are, um, green.)

The starkness of the division should make for depressing reading by anyone studying Germany’s reunification, but it also reflects some basic economic truths. The most gentrified parts of eastern Berlin are the only ones where the Left party did not win the constituency vote.

Although Germany’s east-west differences have reduced since 1991 (partly thanks to large fiscal transfers) the east still lags the west in income, wealth and employment. That also explains why support for what could be considered protest parties tends to be higher in the east. This was illustrated separately in Sunday’s election in the higher numbers of people voting for the new eurosceptic Alternative for Germany party in the east compared to the west.

Posted by Francisco on Tuesday, September 24, 2013