The dismal outlook for Spanish unemployment, according to the IMF


Spanish unemployment in one picture, according to the IMF (via the Financial Times): 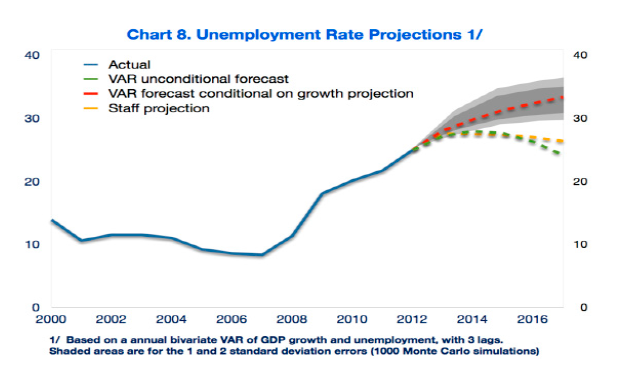 That is from the 2013 Article IV Consultation. From the online front page (emphasis mine):

Key imbalances are correcting rapidly. Sovereign yields fell sharply since the European Central Bank’s announcements about Outright Monetary Transactions (OMT), the current account swung into surplus, the fiscal deficit fell sharply in 2012 despite the recession, private sector debt declined, and the banking system is stronger. But the adjustment process is proving slow and difficult. Growth has been negative in the last seven quarters, unemployment has reached unacceptably high levels, and financing conditions remain tight for small firms.

The reform process has accelerated and deepened. Decisive reforms in the labor, financial, and fiscal sectors, in line with past staff recommendations, is helping stabilize the economy.

Determined action has been taken to help clean up banks in the context of a financial sector program from the European Stability Mechanism, for which the IMF is providing technical assistance. Provisions and capital were greatly increased following an independent stress test and asset quality review in summer 2012. Weak banks are being restructured and much of their real estate assets have been transferred to an asset management company (SAREB). Regulation and supervision was also enhanced.

Fiscal frameworks and transparency have been substantially upgraded. An independent council is being introduced and a commission of experts has issued a proposal to ensure pension system sustainability. Early and partial retirement rules were further tightened. Monthly reports are now available for all major levels of government.

On labor market policy, a major reform was instituted in July 2012 to improve firms’ ability to adjust working conditions (including wages), reduce duality, and promote job matching and training. Unemployment insurance was reduced by 17 percent after 6 months of benefits, and hiring subsidies were reformed. In February 2013, the government announced more flexible hiring arrangements for youth and tax incentives to support youth employment and entrepreneurship.

Product and service market reforms are underway. The government liberalized the establishment of small retail stores and retail business hours. Further reforms have been announced to remove regulations that fragment the domestic market, to liberalize professional services, and to foster entrepreneurship.

Executive Directors commended the authorities for strong progress on critical reforms amid challenging conditions, which is helping to stabilize the economy. External and fiscal imbalances are correcting rapidly. However the economy remains in recession, with unacceptably high unemployment, and the outlook remains difficult. Directors stressed the need for decisive further action to generate growth and jobs, both by Spain and Europe, and continued strong commitment to the reform effort.

Directors welcomed the 2012 labor market reform, which appears to be gradually delivering results. However, they underscored that labor market dynamics need to improve further in order to reduce unemployment sufficiently, including by enhancing internal flexibility, reducing duality, and improving active labor market policies. Many Directors generally saw merit in exploring a social agreement between unions and employers to bring forward the employment gains from structural reforms, while they noted that it would be difficult to achieve. However, such an agreement should not delay the needed structural reforms. Directors also underscored the need to improve the business environment and boost competition, including through product and service markets reform. They looked forward to timely implementation of the plans envisaged under the National Reform Program.

Directors welcomed the authorities’ commitment to fiscal consolidation and agreed that the new medium-term structural targets strike a reasonable balance between reducing the deficit and supporting growth in the short term. They encouraged the authorities to specify how the targets will be achieved and to ensure that the measures are as growth-friendly as possible. In this context, they looked forward to the tax and expenditure reviews. A number of Directors also recommended flexibility in meeting the targets should growth disappoint. Directors welcomed progress on structural fiscal reforms, such as the fiscal council, and highlighted the need to follow through with ambitious legislation and rigorous implementation. Many Directors also looked forward to further progress on developing the enforcement of the Organic Budget Stability Law, and securing the sustainability of the pension system.

Directors stressed the importance of facilitating private sector deleveraging. The insolvency regime should continue to be improved. A number of Directors encouraged the authorities to consider in the future introducing a personal insolvency regime. Directors highlighted that banks also need to play their part by promptly recognizing losses and selling distressed assets. They welcomed the progress made in the clean-up of the financial system but stressed the need to remain vigilant to risks to financial stability and to protect the hard-won solvency. Priority should be given to removing supply constraints, supporting access to credit to small and medium enterprises, implementing scenario exercises on bank resilience to guide supervisory action, and determining, in the context of the forthcoming European balance sheet review, any needs for further capital reinforcement. Directors stressed that actions at the European level, including initiatives aimed at improving monetary transmission, reversing financial fragmentation, and making progress toward a banking union are essential to support Spain’s adjustment effort.

The text is followed by a large table with projected macro figures for Spain up to 2018. I find particularly eye-catching that:

Email ThisBlogThis!Share to TwitterShare to FacebookShare to Pinterest
Labels: Spain