1. The mortgage market (and by extension, the banking sector) of Sweden and Denmark seems to be fraught with risk, in spite of tough regulations. Niklas Magnusson at Bloomberg writes:

While interest-only mortgages in Sweden and Denmark helped households keep up payments during the crisis, consumers now rely too much on the loans, according to Oscar Heemskerk, vice president and senior credit officer at Moody’s.

“We see vulnerability in that model,” he said in a June 5 interview in Stockholm.

At the current pace of amortization, Swedish households will need 140 years on average to repay their home loans, the Financial Supervisory Authority estimates. In Denmark, interest-only loans make up more than half the country’s $490 billion mortgage market, central bank figures show. Danes carry the world’s highest debt burden relative to disposable incomes, at more than 300 percent, the Organization for Economic Cooperation and Development estimates. Debt by that measure in Sweden and Norway hit record levels this year, central bank figures show.

Interest-only mortgages have made housing more affordable, helping send property prices to all-time highs this year in Norway and Sweden. In Denmark, households are still trying to recover from a burst property bubble that’s sent prices down more than 20 percent since their 2007 peak.

“House prices have continued to increase a lot in Sweden, and in Norway particularly, raising questions whether that can continue forever,” Heemskerk said. “What we have seen internationally, time and time again, is that if something goes up, ultimately there will be some corrections.”

Sweden and Norway were dragged through real estate and banking crises in the 1990s and banks in the region now face some of the world’s toughest regulatory requirements to prevent a repeat. Swedish lenders, among Europe’s best capitalized, will need to hold at least 12 percent core Tier 1 capital against their risk-weighted assets from 2015. Basel III sets a 7 percent minimum requirement from 2019.

The FSA in Stockholm told banks in 2010 not to provide mortgages that exceeded 85 percent of a property’s value. The regulator followed up this year by tripling risk weights on banks’ mortgage assets to 15 percent.

Though lessons from previous financial crises have helped Nordea Bank AB (NDA) and Svenska Handelsbanken AB (SSHBA) steer through global market shocks better than their peers elsewhere, lenders in Scandinavia remain under pressure to do more to guard against housing-market risks.

The International Monetary Fund is urging Sweden, the largest Nordic economy, to consider imposing minimum amortization rules to prevent a property bubble. The Washington-based fund also said May 31 that 35 percent would be a safer risk-weight requirement for Sweden’s banks than the 15 percent agreed last month. That was the main criticism leveled against Sweden by the IMF, which estimates the $500 billion economy will grow 2.3 percent next year.

The Riksbank estimates Swedish household debt will swell to a record 177 percent of disposable incomes by the first quarter of 2015 from 174 percent today. Apartment prices have jumped 11 percent in the past 12 months; prices in downtown Stockholm have surged 35 percent since early 2009.

While the FSA in Denmark is trying to calibrate oversight to avoid stalling a recovery, regulators elsewhere in Scandinavia can do more to avert a correction, according to Heemskerk.


2. The central bank of Denmark has estimated the effect of housing prices and interest rates on private consumption:


"During the boom in 2004-07, house prices rose by approximately 60 per cent, but then they fell by around 15 per cent until end-2009. The model shows that if house prices had grown at a steady pace instead, private consumption would have been approximately kr. 25 billion lower at end-2007, corresponding to 1.5 per cent of GDP. Residential investment would also have been markedly lower," says Governor Per Callesen, adding, "This illustrates that the development in the housing market was one of the major factors behind the consumption boom during the upswing and the subsequent sharp decline."

Moreover, the model demonstrates that the falling interest rates in recent years – in response to the strong international slowdown – have contributed substantially to supporting private consumption. The drop in interest rates has both reduced net interest expenses and supported house prices.

"Household disposable income, and thus private consumption, is more sensitive to changes in interest rates than previously. This is because households have accumulated considerable debt over the last 15 years without increasing interest-bearing assets correspondingly. At the same time, a much larger part of the debt is now variable-rate debt," says Governor Per Callesen. "The increased interest-rate sensitivity emphasises the importance of the financial markets having confidence in the Danish economy."


3. Insightful speech by Stephen Cecchetti, from the BIS. He makes two main points: 1. Quantities (stocks) matter, and 2. Moral hazard is a big problem.


The crisis reminded us that quantities tell us something important about the behaviour of individuals and the system as a whole; something that is not contained in prices. Quantities reflect exposures, constraints and vulnerabilities. This point becomes clear when we think about the role quantities play, or will play, in our models. Take the familiar structure where we have impulses and propagation mechanisms. In this standard formulation, quantities are going to enter as state variables that affect the nature of the propagation mechanism. A vulnerability is then a situation in which some quantity gets large in a way that amplifies the propagation of a shock so as to create a large movement in welfare.

As examples of quantities that signal vulnerabilities, let me cite international asset positions of countries and cross-currency banking system exposures. Here, my focus is on the need to consider gross rather than net.

Prior to the crisis, large and persistent current account surpluses and deficits took centre stage in the discussion of global imbalances. Analysts and policymakers rightly noted that large current account imbalances were almost always a precursor to crises. And, what made people think that just because the main culprits this time were very large countries, some of them advanced rather than emerging, it would be different this time?

Well, surely this mattered. As we said in June 2009, “the symbiotic relationship between leverage-led growth in several industrial countries and export-led growth in other economies contributed to sustaining the unsustainable for too long.”

But this was about current accounts; about net flows. Financial vulnerability comes from gross stocks. A run, whether on a bank or a country, is devastating because of the size of the balance sheet; not because of net flows, but because of gross stocks. 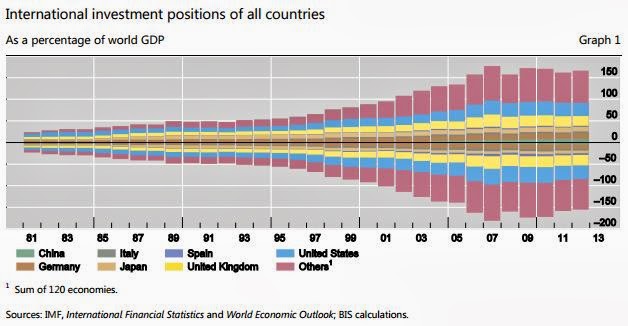 
The fundamental problem is that the private interests of banks and bankers diverge from those of society at large. This is especially true when it comes to the stability of the system and the direct or indirect burden on taxpayers. The source of this conflict is limited liability: the fact that owners and employees are not held financially accountable beyond their initial investment. In addition, increasing leveraging increases the value of the claims on a bank for equity holders. What this means is that the bank’s owners and managers have an incentive to take on risk.

The problem with incentives is compounded by the increase in opportunities to take risk. That is, financial innovation has made things even worse. In the past, payment streams and risks tended to come bundled together. Today, you can purchase or sell virtually any payment stream with any risk characteristics you want – that’s what financial engineering is all about. This ability to separate finance into its most fundamental pieces – the financial analogue to subatomic particles – has profound implications for the way in which risk is bought and sold. While it is true that risk can go to those most able to bear it, the ability to sell risk easily and cheaply comes along with the ability to accumulate risk in almost arbitrarily large amounts. The result is that small numbers of firms or individuals have the potential to jeopardise the stability of the entire financial system.

And some conclusions from his tenure at the BIS:


I have listened to and participated in these discussions for five years. I have benefited greatly from this experience, not least because I have been able to prepare these discussions. But in addition I have learned how problems that are local in their origin can become global in their impact. And it is here that we need to work harder to understand how and when a narrow focus on local concerns is short-sighted. I believe that the crisis has sharpened our awareness of the need to overcome domestic biases.