1. When I think about Canada's energy sector I think about the west provinces and tar sands. Little did I know that there is a project to build a liquefied natural gas (LNG) plant on the east coast. 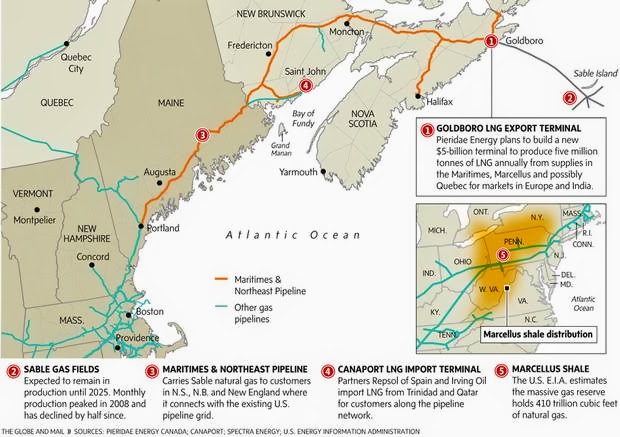 Europe seems eager to jump in to the opportunity of importing natural gas from Canada:

Goldboro signed a multiyear supply agreement with E.ON AG, a publicly traded German company, according to a statement. The deal gives Goldboro an anchor customer, making it easier to attract more business. Companies from India, for example, have been reluctant to sign agreements until infrastructure is in place.

The agreement is a milestone for Canada’s energy industry, with attention surrounding liquefied natural gas shifting to the East Coast from the West Coast, where companies have proposed at least six export projects. On the other side of the Atlantic, it signals how European companies are looking to ease their reliance on Russia’s OAO Gazprom. Indeed, both companies involved in the transaction focused on how their deal is about diversifying supply.

If it takes off, the project would probably put upward pressure on the price of U.S. natural gas.

2. As of April 2013, most Japanese households expected [xls] inflation to be higher than 2% over the next year, and 38% of them expected inflation to be between 2% and 5%, according to a government survey. There has been a large increase in inflation expectations since late 2012. There was another jump in late 2010.

3. Korean companies: dwindling profits. (It is not clear whether the writer is talking about sales or profits. But a fall in sales would be even more negative, in my opinion, than a decrease in profits.)

Major Korean companies listed on the Korea Exchange are seeing a decline in earnings. For some time even after the global financial crisis, most Korean firms managed to achieve steady profit growth, but that is now over.

The Korea Listed Companies Association tabulated the first-quarter earnings of 625 listed companies on Sunday and found that the sales of 322 of them or 52 percent fell compared to the same period last year.

The sales of one in every four dropped more than 10 percent this first quarter.
Some 64 percent of all listed companies saw operating profit either decline or swing into the red during the first quarter. Among the top 100 in terms of sales, the proportion rose to a whopping 70 percent.