Did the recession end in May?

It’s looking more and more as if the recession in the U.S. ended in May. To support that claim I have looked at initial unemployment insurance (UI) weekly claims and the pattern that that time series has followed in previous recessions. The four-week moving average of not seasonally adjusted weekly claims has peaked less than eight weeks before the end* of the each recession since 1970 (see chart). 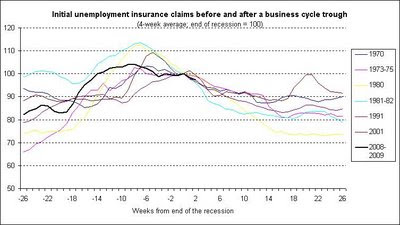 During the current recession, the moving average saw a peak on the week that ended on April 4, 2009. That would put the end of the recession somewhere between April and May (zero to eight weeks later). And if the past is any indication, most likely in May.

The usual caveat applies: the pattern-recognition method is based on only six episodes of recession, and six is a very small number to make any claim on the significance of this finding. Moreover, each episode is spaced by several years from each other, so the hypothetical relationship between UI claims and the business cycle may have changed since last time.

I can’t help, nonetheless, to find some solace in that chart.