It’s again that time of the year when some people fill out a lot of forms and everyone gets mad at the government. No, it’s not taxes; it’s the visa program for skilled workers.

April 1st marks the beginning of the annual application period. The government sets a general quota of 65,000 H-1B visas, plus 20,000 for people with a graduate degree from a U.S. institution. Last year over 100,000 applications swamped the immigration service on the very first day. This year people are expecting an even bigger excess demand. A lottery will decide who gets to live and work in the U.S.

Over the next two weeks we shall witness a repetition of last year’s debate. On one side, businesses and pro-immigration groups advocate lifting the cap. Skilled labor, they say, gives the U.S. an edge in high human-capital sectors, particularly science and technology, and contributes to faster growth. The country should, therefore, welcome as much skilled labor as employers will bear. On the other corner, some professionals in the IT industry and protectionists would like to restrict the hiring of foreigners, if not kill the program altogether. Their main complaint is that employers just want to hire foreign computer programmers and engineers on the cheap.

I have been indoctrinated to believe in the virtues of the free movement of goods, capital and labor. But if we’re going to make any progress in this quarrel, both sides should come clean. Free-traders must acknowledge that immigrants will lower wages in some sectors; some Americans will lose their jobs to foreign nationals. And any system is susceptible to abuse from greedy employers. Failing to mention the negatives does little service to the cause. And simply stating that “the country is better off on the whole” won’t cut it.

Protectionists should accept that the job market is not always a zero-sum game. In many instances, a job “lost” to a foreigner generates several other complementary positions, whether horizontally or vertically. Immigration detractors must also admit that, if skilled people don’t move in, capital and entire companies will move out. Don’t forget that Canada and the UK, just to mention two close rivals, have much friendlier immigration policies than the U.S.

Evidence of the effects of immigration is tenuous, which keeps skepticism alive. For example, a 2007 study by Ottaviano and Peri reported that immigrant and native workers are not perfect substitutes within skill groups —their study included all education levels. Their conclusion, another paper discovered, hinges on a disputable assumption, and has been promptly proven wrong. (George Borjas briefs us in his blog. The paper also provides a short review of the literature on the substitutability of immigrants and natives.) 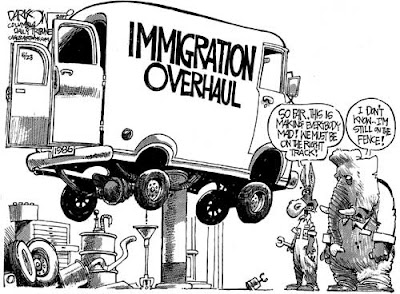 Even more recently, a study by the National Foundation for American Policy, featured by the Wall Street Journal and the Washington Post, found that “there is a positive and statistically significant association between the number of positions requested in H-1B labor condition applications and the percentage change in total employment. The data show that for every H-1B position requested, U.S. technology companies increase their employment by 5 workers.” As the authors admit, it is possible that the hiring of H-1B’s and natives are both driven by business conditions. The study does not prove causation, just correlation —of course this “detail” didn’t make it to the newspapers.

Lotteries, which the government started using last year to allocate visas, provide economists with a natural experiment. If we could get company-level data on number of visas obtained, salaries, and payrolls, we could take advantage of the randomization scheme to get clean estimates of the effects of foreign hires.

Sometimes the evidence is just manipulated. For example, immigration skeptics like to point out that in many industries aliens’ salaries are below market rates. But according to a report by the U.S. Citizenship and Immigration Services (USCIS), 82 percent of first-time visa applicants are below 35 years old, so their work experience is also significantly shorter than average. Even among applicants for renewals, 65 percent are below 35. Comparing their wage with the overall industry average is misleading, if not malicious.

Closer monitoring would warm up protectionists to the H-1B program too. Employers are supposed to pay aliens no less than the prevailing salary. But USCIS examines the employers’ stated offers, and doesn’t have the resources to properly monitor actual salaries. Access to Social Security records and government payroll surveys would go some way towards preventing fraud.

A closer correspondence between supply and demand numbers should please everyone too. The visa limit of 65,000 —effectively a cap on the supply of skilled foreign labor—bears little relationship to demand. It was already 65,000 back in 1990, and it didn’t change through 1998. In 1999 the cap was finally raised to 115,000, perhaps because of the rapid growth of the IT sector in the late 1990s. Then, just as the dot-com bubble was imploding, it was raised again to 195,000 in 2002 and 2003. Employers filed fewer than 80,000 applications each of those years. In 2004, as the job market recovered, the limit was cut to 65,000, plus 20,000 for aliens with U.S.-earned graduate degrees. USCIS could coordinate with the Department of Labor and issue a number of visas that is related to payroll forecasts.

And reform of the green card program should appeal to immigration opponents and enthusiasts alike. Nowadays, a “temporary” work visa lasts three years and is renewable for three more. During that time, many H-1B aliens in their 20s and 30s grow roots in the country, whether they are supposed to or not. It’s only natural that they eventually seek to stay permanently. That process sometimes lasts longer than the work visa, especially for Chinese and Indian citizens. While the green card application is pending, most workers don’t switch jobs because that would push them to the end of the waiting line. As a result, they’re bound to one employer, reducing their bargaining power and putting downward pressure on industry wages.

Two things could, therefore, narrow the chasm between anti- and pro-immigration groups. First, a healthy dose of honest economics. We economists are in the best position to offer an accurate and dispassionate answer to the questions of which and how many Americans are displaced by educated foreign nationals, how much they affect salaries, and how a shortage of skilled labor fosters outsourcing and company relocation. Once we settle that, Congress can decide whether we need 20,000, 200,000, or two million visas. Second, give more resources to USCIS, to prevent fraud and reassure protectionists.

Toning down language would help too. The Economist qualified the system as an “idiocracy.” That is the kind of attitude that polarizes public opinion and stalls reform. And if nothing is done, next year we’ll be having this discussion again, while thousands of high-skill jobs trickle overseas —along with their employers.

In your 3rd paragraph, you state:

"...workers in the IT industry... would like to restrict the hiring of foreigners..."

As a blanket statement, that is not true. Some special interest groups within the IT community hold this opinion, but a great number of people in the IT community have difficulty filling jobs, and understand the need to let skilled workers in, the advantages to our economy of doing so, and the risks involved in playing the protectionist game.

I have written an article on my blog concerning the issue of H-1B visas and would like to invite you to join the conversation there as well:

I stand corrected. Believe it or not, I was planning on writing "some workers," not "workers." I am aware that the protectionist feeling is not generalized. I'll change it now.
Thanks,
Francisco

1. If to get it for granted that applicants with H-1B visas provide a positive intellectual input to the overall labor force, one could expect some extra technological and scientific benefits for lower price, i.e. net technological (likely not monetary) profit. In such technology sensitive industries as pharmaceutics and health care it might be crucial to get as high level of expertise as possible. Therefore, everybody wins in that sense. (This is similar to international trade – developed countries obtain net monetary profit in this trade but provide net technological profit to developing countries)
2. Since labor force participation rate depends on the growth in real GDP per capita, each and every alien employee, if s/he joins labor force, brings a slight decrease in labor force participation rate for aborigines. Currently, LFP is approximately 66%. So, every newcomer reduces local labor force by approximately 0.34 available positions. (Not all newcomers have paid job, although.)

Overall, it might be better to replace these programs with green cards. While employers might fear not getting the employees they would prefer, it would remove them as a biasing force. Auctioning the slots would bring even more sense to the procedure.

"lord":
I only wrote about the supply of visas, but one could write an entire post about their allocation. The post was too long already, so I decided not to. Of course I agree that a lottery is not an efficient allocation mechanism.
You probably know: Gary Becker has written several times on his blog about allocating visas using market prices.

I can agree with everything said here. I'd also make the following 2 changes to the H-1B program:

1. Only end employers may apply, and 1 petition per employee is a no-brainer. (Sounds like the latter is currently the case, but not the former.) No consulting companies, body shops, outsourcers allowed - period. The company has to produce something.

2. Only companies with headquarters or substantial amounts of revenue generation (> 30% maybe, this is presently an open number in my mind) in the US may petition. US firms with large overseas revenue generation should be sourcing large numbers of their employees locally anyway, for support, sales, marketing and other such positions. Foreign firms with such operations shouldn't have to worry about it anyway because they are foreign and are largely subject to different laws.

You still got it, EW. I love the honest economics!
-UF

A very good write. Keep it up.