The fiscal stimulus: ineffective or wrong?

The latest economic data show that output growth has weakened and unemployment is creeping up. The government is worried, with good reason, that the economy is going through a pronounced slowdown, perhaps even a recession. To limit the damage, Congress yesterday approved a battery of fiscal measures. By my reckoning, however, the plan will at best provide a short-lived nudge to consumption, but not employment; at worst, it’ll do nothing.

Starting in May, the government will send $600 checks to individuals ($1,200 for couples and an extra $300 for each child). People who earn too little to pay income taxes, but make more than $3,000, will receive a $300 payment. Payments will total $106 billion and will add to the budget deficit.

Cash outlays are supposed to boost private consumption expenditures and accelerate overall growth. $106b may seem a small stimulus for a $14 trillion economy, but the payments are expected to have a “multiplier effect”: higher demand will prompt businesses to hire more workers, and increased employment will further stimulate private consumption, which in turn will induce more hiring. The process continues ad infinitum. The outlays, therefore, can have a final effect on aggregate demand that is many times bigger than the initial stimulus —hence the name “multiplier.”

The effectiveness of the measure hinges on two factors. First, the fraction of the government outlays that will be spent immediately. According to Bruce Bartlett, previous experiences with tax rebates in 1975 and 2001 indicate that it's small. The recent study by Elmendorf and Furman indicates that it's a 50 percent.

The second requirement, which has received less attention, is that businesses will respond to the initial surge in demand by hiring new workers. If they don’t, then the fiscal package will have no second-round impact on demand, and the stimulus to consumption will total just $50b.

Because the first two quarters of 2008 will be marked by considerable uncertainty about the course of the economy in the medium term, the announcement of the fiscal plan will not have an immediate effect on hiring. Manufacturers may ratchet up their inventories, in anticipation of the small jolt of demand in May, but they will do so by using overtime and temp workers, rather than hiring permanent employees. In the services sector, we won’t see any change in employment until the late spring, and even then employers will similarly meet spikes in demand with overtime hours and temp workers, at least initially. If, come June, forecasts have improved, we may see employment pick up over the fall. But by then the effect of the government checks will have played out. In conclusion, the fiscal package won’t provide any significant boost to employment.

A less obvious reason to reject the stimulus is that the slowdown in aggregate demand is necessary, even healthy. Most of the growth experienced between 2002 and 2006 was based on low interest rates, over-valued real estate, and loose lending standards.

Chart 1, from a story by Michael Mandel at BusinessWeek, tells it all. Mandel estimates that, “if consumer spending had tracked the overall economy over the past decade as it has in the past, Americans today would be spending about $600 billion less a year. The extra spending has amounted to a total of about $3 trillion since 2001.” That extra spending was financed with debt. Quite literally, Americans were borrowing their prosperity from the future —not exactly a sustainable growth path. 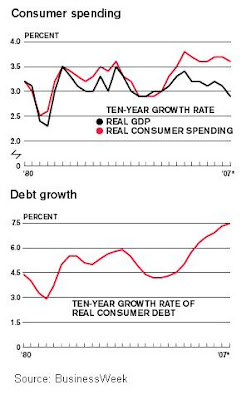 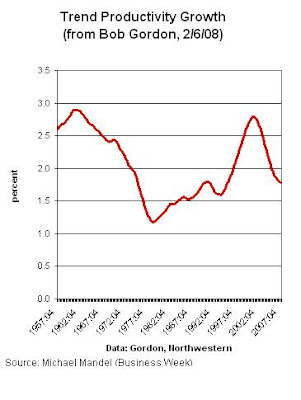 The growth of productivity, the value of output per hour worked, confirms the hypothesis that consumer expenditures were out of line with real income gains, at least over the last five years. Robert Gordon of Northwestern University estimates that trend productivity growth peaked in 2002, and has slowed down ever since (see Chart 2, via Michael Mandel’s blog). The gap between long-term growth of GDP and consumption, on the other hand, has widened over the same period.

So, if the recent growth rate of expenditures was excessive, why is Congress rushing to prop it up? More importantly given that the stimulus will be financed with future tax increases: why are legislators borrowing even more from future prosperity? The answers to these questions have a lot to do with politics and very little with economics.

Notice the hodgepodge of enigmatic measures included in the fiscal package. Congress grants payments of $300 to low-income seniors and disabled veterans, but not to other disabled people. It allows federal housing agencies to insure jumbo mortgages, as if subsidies to the purchase of expensive homes was going to parachute the economy. And it includes specific provisions to prevent illegal immigrants from claiming payments, precluding illegals from contributing to the consumption surge, however small that may be. So, if you think about it for a minute, what Congress did is give itself a votes-buying package, which does stimulate something: re-election.