Imagine if you didn’t have to file a tax return. Imagine if, come T-day, the only thing you needed to do to comply with your tax obligations was to sign a form and mail it. And imagine if this could be done without changing a comma of the tax code. This is not a pipe dream—millions of citizens in different parts of the world already do it.

Austan Goolsbee, professor at the University of Chicago Graduate School of Business and head economic adviser to Barack Obama, is proposing to let the Internal Revenue Service, America’s tax man, put together drafts of individual tax returns and mail them to taxpayers. Experts know the system as “Tax Agency Reconciliation” (TAR). Goolsbee has had the good sense to re-baptize as “Simple Return.”

Tax collection agencies receive all the information they need to fill out the returns of many taxpayers. By law, employers and financial institutions send the data to them. The time spent by filers collecting statements, putting the numbers in the right boxes of the tax form, figuring out the standard deductions and exemptions, and calculating the tax bill--not to mention the fees paid to tax prepapers--are thus a waste.

Sweden and Denmark use the system. In Spain, with seven years of TAR experience, some filers can even request and confirm their pre-filled tax returns by sending a text message. Some Spaniards don’t even have to sacrifice precious TV time: they can do their taxes through their interactive, digital TV sets. (I encourage readers who know of other countries in the EZer Club to let me know in the comments or by e-mail. I’d like to make a list. If you respond, please specify whether the country does TAR or exact withholding.) 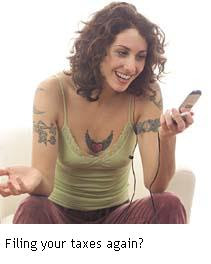 The obvious benefit of pre-filled tax returns is the time savings for filers. In the U.S., the average compliance time for the 1040EZ form, the simplest there is, is three hours and 46 minutes. The other types of tax form take over ten hours. Goolsbee estimates that, if his Simple Return applied to 40% of taxpayers, it would save 225 million hours and more than $2 billion in fees.

The fiercest opposition to TAR would thus come from tax preparers. Thousands of jobs, they’ll clamor, will be lost. For an economist, this is the easiest criticism to counter. Those jobs are not providing any service other than helping to comply with a pointlessly dense tax code. Let tax shops fold, and their workers will find jobs producing goods and services that actually add to social welfare. Creating employment by keeping an unwieldy tax code makes as little sense as digging a hole in the desert and then employing jobless people to fill it. If only Congress were brave enough to hold this argument against lobbyists… (Regarding this topic, I believe there was a lively discussion in the comments following Steven Levitt’s post . Read my own rant about the broken windows fallacy.)

Mailing pre-filled tax returns is not an intrusion on private business either. As Goolsbee argues, governments allow online filing and provide printed tax tables, and nobody opposes to those services on the grounds that they undermine the tax preparation business.

Receiving a pre-filled return in the mail does feel a bit imposing though. Some people will see TAR as an intrusion on individual freedom. It doesn’t need to be. Individuals will be allowed to scrap the return prepared by the government and fill out a new one. And if the taxpayer ignores the pre-filled return, and doesn’t fill out her own, her taxes won’t be filed, so TAR doesn’t infringe on voluntary compliance. The key is to disclose, every year and to every taxpayer, that the return sent by the government is not a tax bill, but a draft that can be turned into a final return if the individual chooses to do so.

To be sure, TAR would not eliminate the need to file a tax return for everybody. People who itemize their deductions, or who don’t have all their earnings reported to the government by a third party, cannot use the pre-filled form. Goolsbee estimates that, at most, 40% of all taxpayers could benefit from a TAR system; and that’s only if the Alternative Minimum Tax is reformed. In Spain, 30 to 40 percent are eligible. Taxpayers who don’t qualify tend to file more complicated tax returns, and thus spend more time and money on filing, than those who are eligible. So the benefits of TAR go mostly to people with low-to-middle income or simple household finances, who spend most of their tax preparation time (or money) gathering and filling out documents, not mining the tax code for deductions.

The best way to reduce the cost of compliance for everyone is to simplify the tax code. This can be done by scrapping the income tax as we know it today, or by eliminating tax deductions, exemptions, and exceptions for special groups. But such changes face even taller political obstacles than TAR. So, since the tax-instructions booklet is not going to get thinner any time soon, let your tax man deliver a pre-filled return—and spend some more quality time with your TV.

This post has persuaded me. I'm voting for Obama. UF

Just kidding. You might be kidding too, but I don't know. So just in case:

I didn't mean this post to be an endorsement for Senator Obama. This post doesn't mean that I have a preference for Obama versus other candidates. It just means that I support TAR, which happens to have been endorsed by Goolsbee. I mentioned Goolsbee's affiliation with the campaign for the sake of full disclosure.

I haven't heard TAR mentioned during his speeches or debates, and Obama's campaign website doesn't mention it either. So there's no guarantee that if he gets elected he will implement TAR.

Most of the criticism comes from Republicans who fear people won't report income the government has no record of, and fear people might actually not mind taxpaying, losing them votes.

You mention that Republicans will oppose TAR because:

1) people won't report income the government has no record of

2) fear that people might actually not mind taxpaying, losing them votes

About 1: There are three categories of income:

a) Income you know the IRS knows about

Regarding a and b, TAR doesn't make any difference: people will continue reporting a and hiding b.

Regarding c: the pre-filled tax form doesn't leave taxpayers off the hook. They're still liable for taxes that the IRS might find about after the taxpayer has sent the return. (The form should be very clear about this too.) So the power of the IRS to audit tax returns and revise the tax bill doesn't disappear, even if the IRS filled the tax return itself. Again, this is something that the IRS should be crystal-clear about if TAR were to be implemented.

Moreover, TAR will lead to fewer (foolish) attempts by taxpayers to misreport income in category a.

In order for 2 to be a concern, you need to claim that the cost of filing taxes is the main reason why people are opposed to taxes. But most Republican voters are opposed to taxes not because the cost of compliance is too high, but because their tax bill is too high. (By the way, I would claim that this is true about anyone who opposes taxes, not just Republicans.)
And I don't think that TAR will create the illusion that taxes have disappeared, if that's what you meant, because taxpayers still need to mail their check to the IRS.

It tells people what information the IRS doesn't have, and is very unlikely to have, even under audits. Not that this amounts to much, but fear is something people understand. I agree Republicans oppose high taxes, but this increases the costs to those non-Republicans that don't pay much in taxes, to increase their pain threshold. I don't consider these good reasons from a policy perspective, but they are important from a political perspective.

I´m TOTALLY AGREE. I think there are some demagogues around...
TAR is not the best system maybe but now, in this countries you wrote before, is the better known. Nowadays, there are a lot of people who pay to a professional economist to do their tax forms, this is not a problem. By the other hand, for people like me, who all their financial and economic information are known by the tax departament, is a good stuff that you can revise the preform sent by the tax departament and, if it´s ok you sing it and send it again. You have not to think about this question for another whole year. Whith this system, apart the matter if you have to pay more or the governament have to retorn some money to you, you avoid to make any mistake and instead, a fraud wich can do that you have to pay a fine!
I think that some people has to change I non-totally-justified and useful job must not be the reason to improve or avoid a "social problem".
Thanks to allow people very interested in economy but with a few knowledge in that field (and in the English language) to participate in this blog.
As soon as you write about the spanish economy I´ll make you some questions about the thinking of some espanish people as a secret, that depending on the results of the future elections in Spain, some litle banks could go to bankrupt (I not agree but some people is withdrawing their money from these banks)
I´m waiting for other comments...

You need us if you have any of these tax problems: Back
Taxes, Unfiled Returns, Missing Records, Threat of Levy, or, if you need an Installment Agreement or an Offers in Compromise A tax levy or garnishment or attachment are all the same thing. The terms may be used interchangeably. A wage garnishment or levy may be against any asset. In the enforcement of tax collections. We prepare all Federal and State Unfiled tax Returns The Fair Tax Act (HR
25/S 1025) is a bill in the United States Congress for changing Tax Solutions laws to replace the Internal Revenue Service (IRS) and all federal income taxes (including Alternative Minimum Tax), Past due tax returns, Past due tax returns, Past due returns, Past due taxes, Unpaid tax, Tax negotiation, Wage levy, Robert M. Adams, Bob Adams