A bash for confidence indexes

Every month the University of Michigan and the Conference Board conduct a survey of households’ confidence on the state of the economy. Each pollster asks several questions and summarizes the results with an index, which is closely watched for signs of consumer distress. Last November, the Michigan index fell by 4.8 points from October; the Conference Board Index dipped by 7.9 points. Supposedly this is bad news because worried consumers are thrifty consumers. Don’t let the surveys fool you: they are almost complete rubbish — unless you know how to use them. 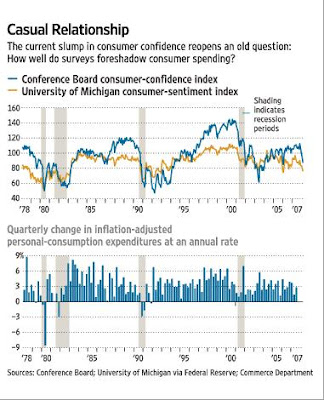 At first glance, both the Michigan index (MI) and the Conference Board index (CI) are correlated with the business cycle: they sink around the beginning of a recession and rebound near the end (see chart nearby, originally published by the Wall Street Journal). They even seem to track the quarter-to-quarter growth of consumption expenditures. Look a bit closer, however, and you’ll see that confidence and reality get out of synch sometimes. For instance, both the MI and the CI were abnormally low relative to consumption growth in 1992-1993, and again during 2002 and 2003. The indices dipped during the Asian crisis of 1998, but consumption growth didn’t budge; conversely, expenditure growth fell dramatically in early 1995 even though sentiment didn’t change.

Formal statistical analyses have found that consumer sentiment says very little that forecasters don’t know already. That is, once this quarter’s spending, interest rates, etc. are known, it does not help much to predict future spending growth. Confidence and expectations matter. The issue, I reckon, is that these particular indices fail to capture them.

A cursory look at the guts of the MI and the CI will convince you that they are literally meaningless. Each of them is a mishmash of five opinions — which, by the way, are not the same for both surveys (see table below). The questionnaires represent but the pollster’s guess of what determines spending. There’s no guarantee that the questions are the ones that actually matter. 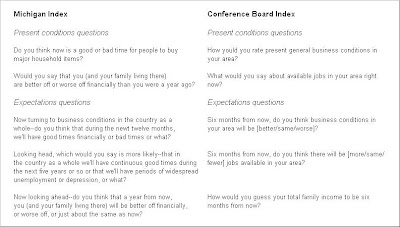 For instance, the MI doesn’t include questions on job security, whereas the CI doesn’t ask about present personal finances. The potential irrelevance of the surveys becomes painfully clear when one examines the first question of the MI: “Do you think now is a good or bad time for people to buy major household items?” With such a specific wording, that question should predict expenditures on cars, appliances, furniture and such, i.e. durable goods. But once past purchases are included into the forecasting model, confidence and expenditures are barely correlated. [1]

Even if one of the indexes had the right composition, there’s no reason why all the questions should be given equal weights. Personal finances and availability of jobs, for example, may influence a consumer’s expenditures more than overall business conditions; short-term prospects should matter more than distant ones. In both the MI and the CI, however, every question counts the same.

Despite my bashing of the indexes, the surveys are worth keeping. Each of them contains some question that can help predict one or other component of expenditures. More specifically, the Conference Board’s questions about job prospects help forecast expenditures on durable goods: sentiment about the current job situation (question number two in the table) significantly predicts purchases of vehicles and other durables; expectations about future jobs (question four) predicts expenditures on vehicles only. [1] The Michigan survey, on the other hand, contains questions which are not used in the indexes. It would be worth exploring whether they are useful for forecasters.

Unfortunately, the component questions are not accessible to most people. If they are, it’s only with significant delay. And even if they were published timely, most people wouldn’t be able to use them because they can’t handle the number crunching. So here’s my advice for the everyday news consumer. First, don’t draw any conclusions from month-to-month changes of the indexes, no matter how large they are. Start believing them only after several months of consecutive rises or declines. Second, the Conference Board index is a better predictor than the Michigan index, because the latter doesn’t include any question about jobs. Third, rather than sentiment indicators, pay attention to data on the labor market: the unemployment rate and the payroll numbers, for example, averaged over at least three months. Not only do they gauge consumers’ confidence more accurately than the confidence indexes themselves: they influence spending decisions directly (the more unemployment, the less disposable income).

In all fairness, the intention of the MI and the CI was never to forecast any specific variable. They were designed over 40 years ago as a rough measure of the households’ view of the state of the economy. Even if the surveys captured expectations correctly, it should be up to economists, not statisticians, pollsters or newspapers, to figure out how those expectations translate into realized outcomes. Some day we’ll know how to do it. I’m pretty confident.

[2] Carroll, Fuhrer and Wilcox (1994) Does consumer sentiment forecast household spending? If so, why? (pdf)