Questioning the virtues of the flat income tax

This Thursday I attended a seminar by the Cato Institute, a libertarian think tank, where one of the speakers presented “Will America become a French-style welfare state?” Cato’s answers to that question and to its normative counterpart were no surprise. What sounded out of tune was the claim that a flat tax will keep government growth in check. And that got me thinking that, maybe, we expect too much from it.

A flat tax is not necessarily more efficient

Strictly speaking, a flat income tax consists of a uniform tax rate on earnings. Everyone pays a given percentage of their taxable income, period. The flat tax eliminates the disincentive to work created by graduated tax rates, and reduces the payoff from tax avoidance shenanigans. Lower, flatter marginal tax rates thus raise total revenue. It’s as if the IRS adopted the latest Coca Cola mantra: “You give a little love and it all comes back to you.” But bigger tax revenues mean a bigger government. And a bigger government means bigger distortions, from larger farm subsidies and expanded welfare programs for example. It also means larger mismanaged health and education systems.

A subtler point is that governments seem to be less politically constrained to raise a uniform tax rate than a progressive one. For evidence we can look at a flat income tax the US has used since 1917 – we call it the Social Security (SS) tax. In 1955, the rate paid by workers was only 1.7 percent, but it more than quadrupled to 7.7 percent by 2006. On the other hand, the average income tax rate for a four-person family with median income was 5.7 percent in 2006 as well as in 1955. (See Chart 1.) Yes, the income tax increased till the early 1980s and then decreased. But that’s my point: the flat-rate SS tax has never decreased. 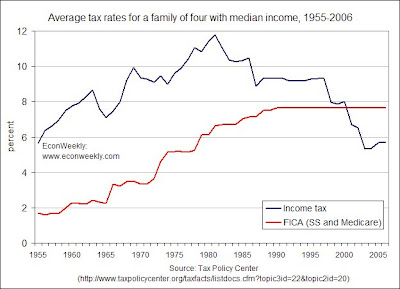 Between 1962 and 2006 the ratio of social insurance taxes to GDP more than doubled; its income tax counterpart, on the other hand, didn’t change. (Revenue figures here, GDP data here.) Who’s to say that a flat income tax wouldn’t spiral up the same way the flat SS tax did?

I’m not sure what the reasons for this lack of political restraint are when it comes to jacking up the SS tax rate. Economists themselves may have contributed to it, by cheering on flat taxes on the grounds of economic efficiency. (Still, this doesn’t explain why the government didn’t offset those raises with reductions of the inefficient progressive income tax.)

In a political vacuum, a flat tax is more efficient than a progressive one. We just don't happen to live in one of those.

A flat tax is not necessarily simpler

As a reader of The Economist put it one time: “Computing a progressive income tax requires a subtraction, a multiplication and an addition. Computing a flat tax eliminates the addition.” A flat tax can be as complicated as one wants – it all depends on how many steps it takes to calculate taxable income.

A simple tax, on the other hand, doesn’t need to be a flat tax. Republican candidate Fred Thompson reports the Wall Street Journal.

The proposed system is voluntary. Tax filers would be allowed use the current tax code instead. But who in his right mind would do that? Well, probably a few wealthy people with lots of loopholes to exploit. The vast majority, I reckon, would choose the simple tax – maybe even if they were saving a few bucks with the old one. And this is the great tragedy of our current tax code. It provides incentives to hire tax consultants, buy tax preparation software, and spend countless hours trying to figure out which deductions tax filers can use. In terms of tax savings, the return on all that labor is small or negative. Give taxpayers the mere option to bypass the mess, and you’ll wipe out all that waste.

We don’t know whether a flat income tax promotes growth 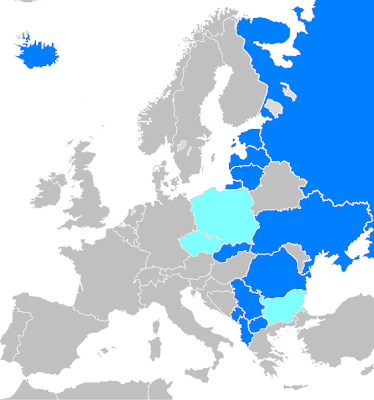 Gung-ho advocates routinely bring up evidence from countries that have implemented the flat tax. Aside from the tiny islands of Jersey and Guernsey, and the city of Hong Kong, all these countries are in Eastern Europe and Central Asia (Kazakhstan and Kyrgyzstan). (See map; the light-blue countries will introduce the flat tax in 2008, except for Poland, which is still thinking about it.)

Most, if not all of them, experienced increases in macroeconomic growth, tax revenues, tax compliance and investment. It just so happens that those countries went through a lot of other reforms. For example, they improved on the protection of property rights and the enforcement of contracts.

Finally, some of them joined the European Union or were about to do so when they implemented the tax. In general, governments took many deliberate steps to attract foreign investment. Hence empirical studies by the IMF have had a very hard time estimating the effect of the flat-rate tax.


Libertarians and economists push for flat taxes on the grounds of efficiency, simplicity and economic growth, sometimes without much empirical support. Once you let those fizzy claims dissipate, the flat tax looks rather… well, flat.