When the heat is not in the core

Prices rose 2.4 percent in the year to September 2007, using the monthly price index for personal consumption expenditures (PCE); the reading was 0.6 percentage points higher than in August. Core inflation on the other hand, which doesn’t include the prices of food and energy, was 1.8 percent in the year to September 2007, and the reading stayed unchanged from the previous month.

Over the entire history of the two time series, the average difference between core and overall inflation has been close to nil (0.12 percentage points between 1960 and 2007). But the gap between the two does not necessarily have to be small and indeed has not been small for prolonged periods, sometimes lasting several years. (See chart 1.) 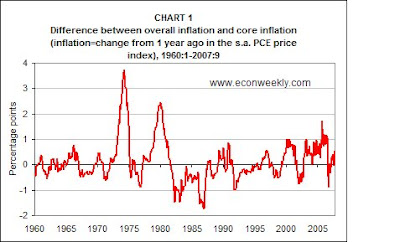 Most recently, between November of 2002 and August of 2006, overall inflation stayed above core inflation for 46 consecutive months. The average (and median) difference was 0.7 percentage points, a large one considering that core inflation ranged between 1.3 and 2.5 percent. (See chart 2.) 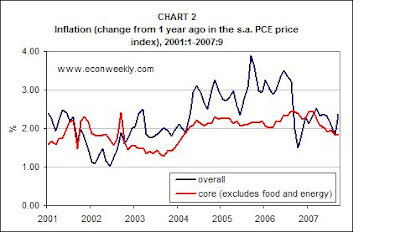 Most central banks including the Federal Reserve follow core prices, which means that many times their gauge of inflation is below the increase in the cost of living. Whether the Fed likes the prices of food and energy or not, wages are implicitly pegged to overall, not core inflation.

Suppose that the Fed has a target core inflation rate of two percent. If the public expects an overall inflation of, say, three percent next year, wages will increase accordingly, and so will nominal consumption expenditures. Monetary theory tells us that this will push actual overall inflation up to around three percent. Unless the prices of food and energy change relative to the rest of the prices, core inflation will also be around 3 percent, above the Fed’s target.

Conducting monetary policy by tracking core inflation is tantamount to assuming that the average gap between core and overall prices won’t get too far for too long (and that workers and employers have the same expectations). The US experience between 2002 and 2007 indicates otherwise (see chart 2). Given that economic conditions during those years have been “normal” --as opposed to the extraordinary oil shocks of the 1970s and early 1980s-- the premise that food and energy prices won’t stray too far from core prices doesn’t seem adequate as the default hypothesis for the rest of the century (barred a major technological breakthrough).

The main reason why central banks track core inflation, rather than overall inflation, is that the prices of foodstuffs and energy are notoriously volatile. Short-run changes in the price of those goods reflect variations in weather conditions, geopolitical climate, commodity markets, and discoveries of new oil reserves, for example. Central banks assume that those phenomena have a zero-mean effect on inflation in the long-run, so their effect on prices in the short-run can be safely ignored. 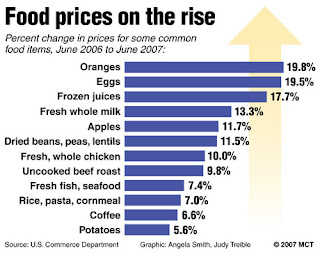 There is no question that inflation should be stripped out of its most volatile components. But it’s worth exploring alternatives to what we now know as core inflation. One possibility would be to use the prices of all goods and services, but then adjust their weights to reflect their volatility –prices with high volatility and low correlation with overall inflation would receive low weights. Those weights would evolve as new data are incorporated to the time series.

Another possibility is to leave out all goods and services with volatilities above a certain threshold. Those goods would not necessarily be food and energy, and would not necessarily be the same every month or every quarter. The Federal Reserve banks in Dallas and Cleveland have been calculating a trimmed index of inflation for a while. (Robert Rich and Charles Steindel of the Federal Reserve Bank of New York explore three alternatives to “ex-food-and-energy” inflation.)

A more radical approach would consist of targeting wages or labor costs directly, instead of the price of goods. (Knzn, over at “Economics and…” has been advocating this policy. Start by reading this post and this one.)