How to eliminate flight delays, now 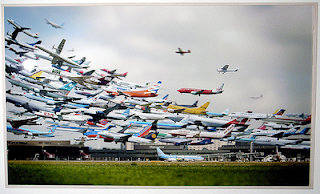 The US Federal Aviation Administration (FAA) is bent on fixing flight delays. To that end, the agency proposes to cap traffic at JFK. The feds say that the New York airport, which has one of the worst records in the country, can’t handle more than 80 operations –take-offs and landings— per hour, 20 percent less than it does now. The FAA has restricted traffic at nearby La Guardia for quite some time now.

Mandatory caps can get the job done, but we would be better served by a cap-and-trade scheme: the FAA should force airlines to buy and sell airport slots in the marketplace.

A reduction of flights would raise air fares; on the plus side, it would ensure that demand didn’t outstrip available capacity. Trade would guarantee that that capacity is used by the airlines that value it most. Flying small, regional jets into and out of busy airports would no longer be profitable; those flights would be directed to secondary fields such as Stewart, about 60 miles north of New York City, instead of JFK.

Down to the nitty-gritty

As I explained in a previous post, there exist two types of over-scheduling: congestion and clustering. Congestion happens when too many airlines, acting independently, try to use installations at the same time. On the other hand, companies that use the hub-and-spoke model –most carriers- cluster their flights on purpose. To fly a customer from A to B, they make her go from A to their hub, and then from the hub to B. In order to offer the maximum number of connections carriers schedule lots of operations at a handful of places (the hubs); to minimize layovers, any given plane is scheduled to depart from the hub within an hour of its previous arrival.

Imposing caps would clearly get rid of both types of over-scheduling. The effect of trading, however, would depend on two things: (a) the initial allocation of slots, and (b) market concentration. Suppose that, initially, the FAA grandfathers the current allocation, that is, slots are given out in proportion to current usage. All six big carriers* are heavily invested in at least one or two airports. (American Airlines, for instance, operates 92 percent of the flights arriving at or leaving from Dallas; Continental drives 83 percent of the traffic at Newark.) A slot in those hubs is worth much more to incumbents than to entrants. Few of those slots would therefore be sold, and trading would have little direct impact.

For the moment, the FAA is focused on airports in the North East. With a selective application, however, the cap-and-trade scheme would turn out a double-edged sword. On one hand, airlines could move operations from restricted to unrestricted airports; this would happen at fields that can function as substitutes of each other, such as Newark and JFK. On the other hand, the beneficial effect of unclogging one airport would ripple through the entire network: one fewer take-off in one place means one fewer landing somewhere else, less clustering at a few airports implies that landings are more spread out over the day at the rest. This would happen at airports that can complement, rather than substitute, each other.
So far the FAA has championed efforts to promote efficiency only at the La Guardia, JFK, O’Hare and Ronald Reagan airports. The agency requires companies to use their slots at least 80 percent of the time, or else surrender them. Unused slots are not sold to the highest bidder, unfortunately, but reassigned by lottery.
Got any other ideas?

The industry hates both caps and slot trading. They claim that variable prices won’t be effective. Bill DeCota, aviation director at the Port Authority of New York and New Jersey, told the Wall Street Journal “There is no price that you could put in effect that would impact demand.” I guess the fundamental laws of economics don’t apply to air travel.

Airlines clamor for an upgrade of navigation instruments instead. Satellite technology will let planes keep shorter distances from each other during take-off and landing, increasing the traffic volume that airports can handle. The diligent Federal Aviation Administration has already proposed a system, “NextGen.” The toy, alas, won’t be on the shelves for Christmas. Not until 2025. 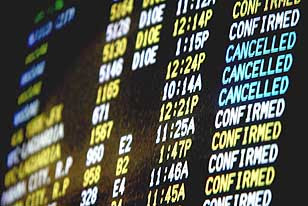 So-called “demand management” would make air travel less appealing to consumers: tickets would be more expensive, layovers more frequent and longer. But consider the alternative: as airlines cram their schedules with more flights to keep up with rising demand, delays will become longer, cancellations more frequent. At some point travelers will not be able to plan their trips at all: planes will take-off, literally, whenever they can. That may suit college students going home for the summer just fine, but I can’t imagine whom else.

A cap-and-trade system should not be a substitute for increasing capacity. In fact, to resort to cutting out flights amounts to an admission of failure. The industry should (and will) invest in new airports, expand existing ones, and adopt technologies that increase the number of slots per airport. Unfortunately, for the next 20 years, efficient rationing is the best we can do.

But there must be a way to improve things without making us poor lowly business travellers have to wait longer in layover airports. Price increase aside, isn't there some other way to improve scheduling without increasing layover time? Inquiring minds entreat your input. UF

I hear your angst. Time is money for everyone, but especially for business travelers.

Schedules won't change much in popular routes such as DC-NY, Boston-NY, or DC-Boston (even Chicago-NY). Those are direct flights (so layovers are not an issue), and popular among professionals (so airlines won't have any problem filling the planes). However, they'll be less frequent and, therefore, more expensive.

For other routes, and if things pan out as I predict, companies may form coalitions in order to: (a) gain purchasing power and (b) reach scale. A coalition of businesses in Detroit or Denver, for example, which are not top business destinations, could reach an agreement with an airline to create a shuttle service to LA. That would ensure that the route is not eliminated, fares are affordable, and capacity is "reserved" for business travelers.

A non-market mechanism would consist of creating "business traveler quotas." The FAA would mandate that airlines reserve a certain number of seats for businesses, and sell them at the same price as unreserved seats. But that would be horribly inefficient. Not to mention that airlines would strongly oppose the idea.