Raising the gasoline tax will not curb CO2 emissions (very much)

Fuel taxes in the United States are among the lowest in the world. In 2006, the average American paid $0.39 a gallon in fuel taxes, including federal and state rates. People paid $2.04 in Japan, $3.81 in France and $4.23 in Britain, according to the Federal Highway Administration. Moreover, the federal government has not raised the tax since 1993, making an increase politically justifiable.

Motor gasoline plus diesel fuel accounted for 1,604.6 million metric tons of CO2 emissions in 2005, second only to power generation as the leading source of carbon dioxide emissions (see chart, created with data from the Energy Information Administration). An increase in the gas tax is also easy and cheap to implement, unlike the cap-and-trade system, another solution to CO2 emissions that the media are discussing . 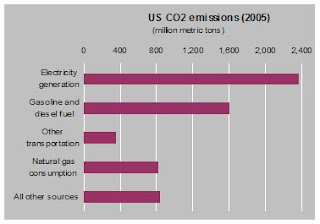 The gasoline tax can accomplish several good things, and do it very quickly. It raises funds to build roads and bridges. It can spur economic growth, by stimulating saving and investments, if we compensate it with a reduction in income taxes. But there is one thing the gas tax will not be able to do, and that is curbing carbon emissions in the near future.

When the government increases the fuel tax, everybody pays more for their gasoline. But not everyone is equally able and willing to cut back on their driving. UPS has no way to deliver packages to your door other than with a truck, but city dwellers can take the bus downtown instead of driving. A lot of people would take the train downtown on a weekday, when the service is frequent, but it would be a pain to do so on a Sunday, when the train comes once every hour.

An economist would say that different car users, or a given car user under different circumstances, have different elasticities to the price of gasoline. In the examples above, city dwellers’ demand for gasoline is more elastic than UPS’s. In theory, as well as intuitively, more elastic users should be taxed more than inelastic users, because the former reduce their gas consumption more than the latter, for a given increase in gas prices.

We cannot charge different gasoline tax rates to different people or at different locations. Arbitrage would render that policy ineffective. So federal and city authorities should implement mechanisms that increase the effective cost of driving, not of gasoline. It is much easier to tax driving at different rates than it is to make the gasoline tax vary by location or time.

Here are some examples of how to tax driving, while at the same time taxing elastic drivers more heavily:

1. Charging a fee to access the city by car. The intention here is to make commuters switch to public transportation once they reach the metropolitan area. To make this measure effective, it might be necessary to build parking lots near train and bus stations in peripheral neighborhoods. Cities might also need to increase the frequency of bus and train services. The city of London has implemented a city access toll, with great success, and New York and San Francisco are thinking about it.

2. Variable price of city stickers. City stickers should be more expensive in neighborhoods where driving is less necessary.

3. Price of parking. The price of parking should vary according to the availability of public transportation connections. Parking spots in areas which can reached by public transportation or on foot should be more expensive than those in isolated neighborhoods. Likewise, the price of parking should vary during the day and over the week, becoming more expensive during business hours, when subways and buses have more frequent services, and cheaper on weekends and late at night. The city of San Francisco has experimented with dynamic pricing of parking.

4. Taxicab surcharges. Cities could apply a surcharge to cab rides within the metropolitan area covered by subway and bus lines.

5. Taxing commercial and private vehicles at different rates. Fuel taxes and city access fees should be lower for commercial trucks. This may come across as counter-intuitive: after all, trucks pollute more than cars. But remember, the principle is to charge more to more elastic drivers. Trucking companies have no other way to bring goods to the city core; you can do your shopping on the internet when gas gets very expensive. (By the way, Austan Goolsbee has found empirical evidence that people shop more online in states where shopping in physical stores is relatively more expensive.)

Many cities in the US lack the basic public transportation networks to make the proposed measures work. Those places should go ahead with the measures nevertheless. The taxes and fees I propose will raise large tax revenues quickly, which city governments can then use to create public transportation services. Because creating that infrastructure will take time, cities could borrow money upfront, to be repaid with toll and parking revenues, and run temporary shuttle and bus services from the periphery to central areas (bus lines are faster and cheaper to set up than trains and subways). Additionally, or while those cities develop adequate public transportation networks, businesses should be given incentives to have their employees work from home, say one day a week.

The measures I call for have the added attractiveness of reducing traffic congestion. If the government’s only purpose is to cut carbon dioxide emissions though, I would propose exempting electric cars from city access tolls, surcharges, etc. and reducing them for fuel-efficient cars.

An undiscriminating, flat-rate gasoline tax is very effective at raising revenues, but it is a blunt instrument for the purpose of curbing carbon dioxide emissions. We should come up with fees, taxes, regulations and, in general, clever mechanisms that effectively reduce those emissions, as cheaply and quickly as possible.

Email ThisBlogThis!Share to TwitterShare to FacebookShare to Pinterest
Labels: environment

Excellent article, I think the tax you propose would have the added benefit of avoiding most of the potential for economic disruption posed by a broad increase in the the gas tax.

It is true that some users of gasoline have different elasticity than others, but is this a good reason not to implement a gasoline tax?

If the price of gasoline (excluding taxes) is controlled by supply and demand, then wouldn't the reduction of gas use by some people (commuters, city-dwellers) drive down prices for everyone (including UPS).

Many people who can afford to do so will drive smaller cars, trade-in the SUV, consolidate trips, use bus & rail service, carpool, etc. Suppose this decrease in demand for gasoline drives the natural price down to $3.60 a gallon, including the gas tax. UPS isn't paying more for gas.

Also, even if the price would be driven up, with the problem of co2 emissions facing us, wouldn't it be fair to require those who use gasoline to pay for the environmental damage?

If there's an environmental cost to pay for UPS delivering a package, then why not raise a tax to pay it? UPS can pass the cost onto customers whose demand for shipping is causing the fossil fuels to be burned.

The effects of climage change are far more worrisome than a disruption/decrease in operations at UPS or another organization, I believe.