2008 might be the year when jamón leaves the confines of the Iberian peninsula and becomes a mass consumption good in the US and China. This blog post will walk you through an analysis of what is likely to happen to the price, quality and international penetration of the precious cured meat.

This week newspapers in Spain reported that China is about to lift the ban on imports of jamón. The Economist anticipated that the stuff would become legally available in the United States in 2007 (to the best of my knowledge the Department of Agriculture has not relaxed the regulation yet). [UPDATE (11/14/07): The first 300 legs of jamón arrive in New York today.]The vision of a sudden, massive increase in demand has Spanish consumers fretting about a price raise –and producers rubbing their hands. This blog post will walk you through an analysis of what is likely to happen to the price, quality and international penetration of the precious cured meat.

For this type of problem, it helps to think about what will happen to the demand for the product, and then its supply. To avoid getting off-course narrow down the drivers of changes in supply and demand to these three: Preferences, Endowments and Technology (PET).

As with any other good, an increase in demand just by itself will increase the price of jamón. The question is whether that shift in demand will actually happen and how large it will be. Preferences for pork in China are different from those in the Mediterranean. The Chinese consume most of their pork either fried or in stews and soups. Spanish ham is always eaten cold, as an appetizer, or as a cold cut in sandwiches, none of which are part of the Chinese habits and culture.

The product may appeal only to sophisticated elites in big cities like Shanghai or Beijing. The situation is similar in America, in the sense that cured meats are not part of mainstream preferences. There is, nonetheless, a significant population of Mediterranean origin, mostly Italian, who may have retained a taste for similar goods, such as prosciutto and luganega.

With regards to endowments, Americans are wealthier than the Chinese, which is relevant because imported jamón is pricey: today the average price per pound on an American store dedicated to Spanish foodstuffs is about $31.

So the fraction of consumers who would buy Spanish ham is higher in America than in China: a difference in endowments is reflected in a difference in the size of the demand shift. 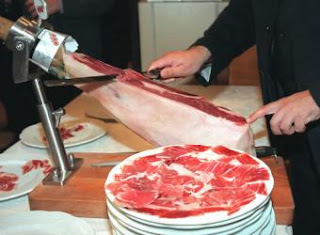 Industry insiders and the media in Spain seem to suggest that the recent shortage of pork meat in China presents an opportunity. But, as we have seen, the Chinese have neither the tastes (preferences) nor the income (endowments).

On the supply side, let us consider the production technology first. (Technology does not apply to the demand side, because it refers to how the good is produced. Likewise, preferences do not pertain to the supply side analysis.)

There exist two basic varieties of jamón: serrano and ibérico. Ibérico, the high-quality kind, is made from pigs of the Iberian breed only. More importantly, for a leg to earn the ibérico denomination, the pig must spend the last several months of its life living on pasturelands, feeding on grass and acorns. Moreover, the pigs cannot roam around just anywhere: farmers need to raise them in a dehesa, an ecosystem endemic to the Iberian peninsula. Serrano ham, on the other hand, may be made from any pig (typically white pigs). The animals eat an authorized commercial compound feed, and are raised in factory-like farms. (Click here, here and here to learn more about varieties and elaboration of the product.)

Due to the differences in pig-raising methods (technology), the production cost per additional unit of jamón serrano is thus lower than that of jamón ibérico.

Given these considerations, we can make two predictions:
1) It is more than likely that new demand would be met by increasing the production of low-quality ham. That is particularly likely in the case of exports to new countries, where consumers cannot distinguish between varieties.
2) If there existed a sizable demand for high-quality jamón from either China or the US, the price of that product would increase significantly. Moreover, the amount available for the national market would diminish. Total production would not increase very much.

Another way supply can increase is by shortening the curing period, which is a way of changing the technology. After pigs are slaughtered, the hams go through several phases of salting, resting and drying. Production time (after slaughter) oscillates between 13 months to 41 months, depending on the size of the leg and the desired quality. The ministry of agriculture imposes minimum curing and storing periods, but the incentive to cheat is great. Producers incur large fixed costs, so increasing the turnover of legs is the least costly way to increase output. Shortening the curing period results in a lower quality of the final product.

Cheating would be more likely early on after the opening of new markets. Risk-averse producers would be naturally reluctant to invest in new facilities before it is certain that there exists increased demand.

The most likely scenario is this: jamón will not become a mass consumption food in either China or the US. Spanish producers will export small amounts, and of the low quality kind, which will continue to be sold at price of gold in gourmet stores and fancy restaurants. The price and output of high-quality ham in Spain will not change very much, and the price and output of the low-quality one will increase somewhat.

If you liked this, you can use your analytical skills by thinking about Steven Levitt’s Shrimponomics or discussing whether Starbucks will take Russia by storm .

What do you think is going to happen to the Chinese demand for jamón? What about the American demand? And the world demand?
I have intentionally left out the possibility that other countries start producing jamón. What do you think would happen then?
Do you know of any other product that is about to experience an expansion in its potential market?
Please post your comments.